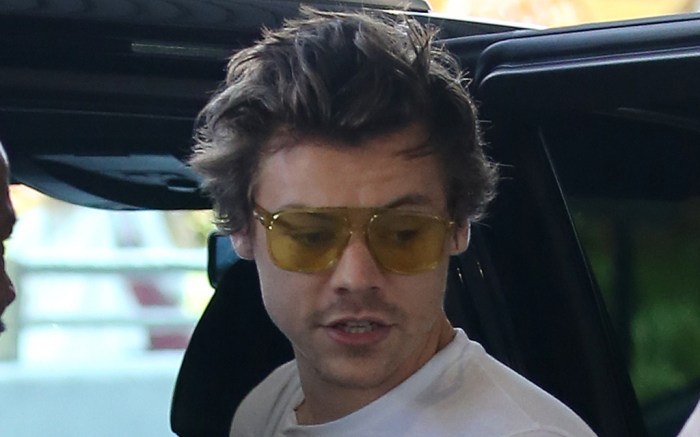 Gucci tapped Harry Styles for its latest episode of GucciFest, the brand’s take on a fashion and film festival.

In the third episode for the online festival, Styles modeled a selection of pieces from the brand, channeling the best of 1970s-era fashion. The ensemble included a pink varsity-style T-shirt teamed with denim cutoff shorts.

“For his guest appearance in Episode 3, @harrystyles wore a printed T-shirt featuring the year 1921, the year Gucci was founded and the number 25 on the back—@alessandro_michele’s lucky number,” explained the brand in the caption.

On his feet, the “Watermelon Sugar” musician modeled the brand’s signature loafer silhouette with a heeled twist. Set atop a lifted block heel, the black leather pair highlighted a side-dipping vamp along with a gold metallic horse-bit detailing across the top. Similar styles from the brand retail for $850 at Gucci.com.

The Guccifest look is far from Styles’ first occasion wearing footwear typically deemed feminine. At the 2020 Brit Awards in London back in February, the “Adore You” singer walked the red carpet in a tailored burgundy suit layered over a purple sweater; under the eggplant-colored top, Styles chose a shirt with a large lace-trimmed collar and baby blue cuffs showing. He accented the look with a white pearl necklace, balancing the tailored shape of the suit with the vintage chicness of his accessories.

The finishing touch on his unparalleled look was a set of classic shoes: Mary Jane flats, a silhouette historically favored by girls and women since the Brown Shoe Company coined the term in the early 1900s. Styles followed the lead of creative director Alessandro Michele, who paired the shoes with trousers and a sweater during the Gucci men’s fall ’20 show in Milan; the black leather style features cutouts on the forefront, a low-profile heel and a cross-foot strap, a signature of the silhouette.

While Styles decided to match the shoe with a textured cream sock, the Mary Jane style was worn on the runway with a taupe textured-knit pair.

Most recently, Styles was put under the magnifying glass for his non-conforming style in his cover shoot for Vogue. Serving as the first male solo artist to grace the magazine’s cover, the singer didn’t hold back, posing in everything from Gucci gowns to Comme des Garçons Homme Plus kilts. The daring editorial caused a stir amongst those thrown off by the new perspective on masculinity. Stars like Olivia Wilde, Sarah Bareilles and Zach Braff, though, jumped to defend Styles on social media, writing: “Our whole lives boys and men are told we need to be manly. Life is short. Be whatever the f*** you want to be.”

Our whole lives boys and men are told we need to be manly. Life is short. Be whatever the fuck you want to be. pic.twitter.com/oY6ji3tpaI

For his everyday style, the 26-year-old star oftentimes eschews gender conformity and chooses outfits and footwear that could be considered breaking expectations and standards. The “Falling” singer elevates his ensembles with bold patterns and bright colors and tends to favor his most beloved Gucci Ebal heeled boots; he sports the silhouette in white, black, red and more shades to team his ensembles both on and off the stage.

Click through the gallery to discover more of Harry Styles’ best and boldest looks over the years.