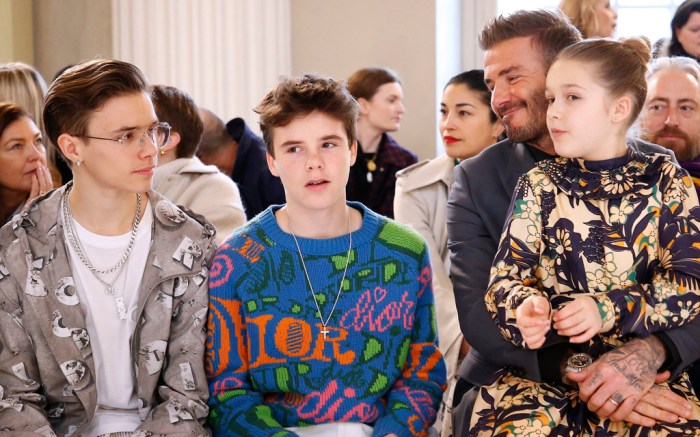 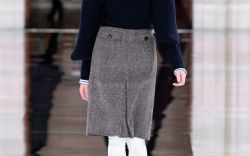 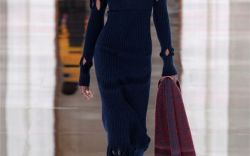 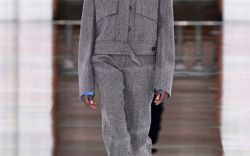 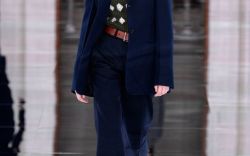 Victoria Beckham runways tend to be a family affair, and today’s London Fashion Week fall ’20 show was no exception.

While the singer turned designer’s eldest son, 20-year-old Brooklyn, was not in attendance, her other three kids (17-year-old Romeo, 14-year-old Cruz and 8-year-old Harper) cheered her on from the front row. The kids sat alongside their ex-soccer star father, David Beckham.

Victoria’s personal style tends to include lots of solid colors and simple silhouettes, but her children went for decidedly bolder looks. Harper sat on her dad’s lap in a floral midi dress and Dr. Martens boots. She appeared to be wearing a child-sized version of the 1460, FN’s 2019 Shoe of the Year.

Romero looked like a ’90s version of his father in a patterned gray zip-up and white corduroy pants. On his feet, the teen sported a pair of Air Jordan 1 x Dior sneakers. The shoes aren’t being released until April and are rumored to come with a $2,000 price tag.

David went for an understated look, sporting a dark suit and shining black dress shoes. The Beckham clan was flanked on either side by Edward Enninful and Anna Wintour, editors of British and American Vogue, respectively. Other celebrity attendees to the Victoria Beckham fall ’20 show included Alexa Chung, Karen Elson and Samantha Ronson.

Click through the gallery to see the full Victoria Beckham fall ’20 collection.