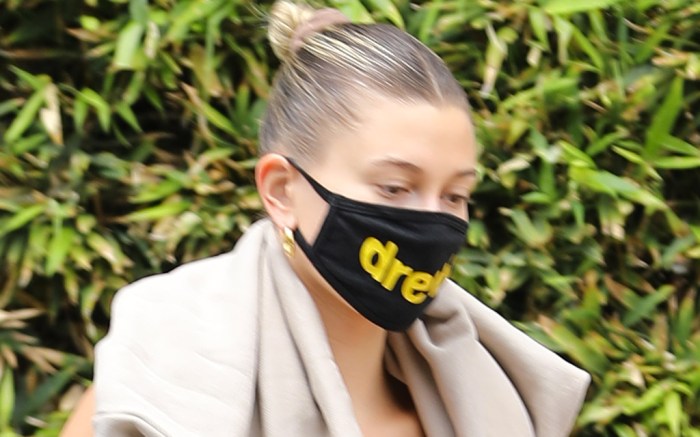 Hailey Baldwin did the athleisure trend for her outing today in Los Angeles.

The media personality ventured out in Southern California alongside her husband Justin Beiber. As she headed to her car, the 23-year-old showed off her toned figure in matching faded mauve $45 sports bra and $65 leggings look from SETactive, topped off with a face mask from her husband’s Drew House brand.

Worn with white ankle-length socks, the model threw on a pair of ever-stylish sneakers courtesy of Kanye West. The Adidas Yeezy Boost 350 V2 “Clay” sneakers first debuted in March 2019; the engineered Primeknit uppers come in mixed shades of pink and faded orange with a rubber sole featuring Adidas’ signature Boost technology. Originally selling for $220, the lace-up pair now resells for $309 at Farfetch.com and for $305 and up depending on the size at StadiumGoods.com.


Baldwin was accompanied by her other half for the outing, Justin Bieber. The “Yummy” singer opted for a relaxed combination of a red hoodie with a matching beanie as well as tie-waist gray sweatpants. His shoe of choice comes from Nike and is the brand’s classic Air Force 1 silhouette; the “University Blue” colorway debuted in 2018 with a price tag of $90 but resells now for up to $345 on StockX.

Most recently, Hailey Baldwin joined a Levi’s campaign starring alongside Jaden Smith, in which she included her beloved Air Forces and Dr. Marten’s shoes. She has also appeared in marketing campaigns for Guess, Zadig & Voltaire, Ralph Lauren and Tommy Hilfiger. In 2016, she joined Ugg to star in the brand’s Classic Street Collection campaign for fall ’16.

As for personal style, Baldwin’s shoe closet includes an eclectic mix. Aside from the Air Forces, she’s also been spotted wearing pairs from Chanel, Off-White and the Nike x Fear of God collab, along with heels from Tabitha Simmons.