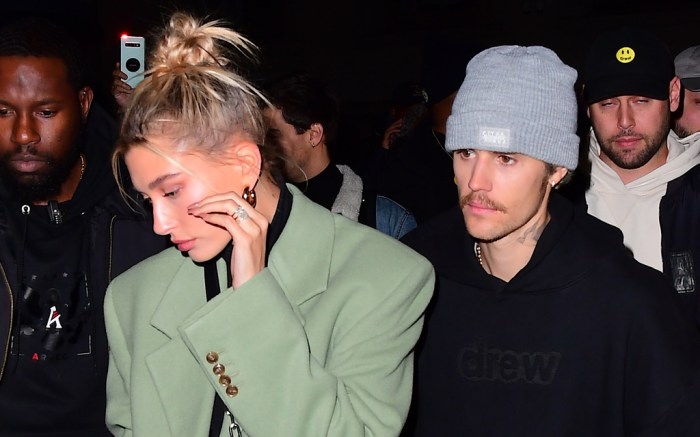 Baldwin’s ensemble was a lesson in layering — and in seamlessly incorporating multiple textures into one look to break things up. The “Drop the Mic” co-host wore an oversize wool Martine Rose coat in moss green over a Wolford top and Danielle Guizio leather pants.

On her feet, Baldwin added yet another texture: satin. She chose a pair of Alexander Wang logoed boots in the soft material. Called the Vanna, the boots have a trendy square toe, ruched detail at the upper and a 3.75-inch heel. Nordstrom.com has the Alexander Wang Vanna in stock for $995.

The A-lister accessorized with Jennifer Fisher hoops and an Alexander Wang belt bag, which costs around $760 on Farfetch.com.

Meanwhile, Bieber’s after-party look was all about comfort. The pop star wore a black hoodie from his own Drew House label teamed with pajamalike plaid pants and smiley face-adorned Drew House socks. For footwear, the Biebs went with low-cut camo-print sneakers. He accessorized with a gray beanie.

Last night’s episode of “SNL” was hosted by RuPaul. Bieber performed “Yummy” and “Intentions” on the show, bringing out rapper Quavo to assist with the latter.

Justin Bieber Takes ‘Just Out of Bed’ Style to the Streets With Messy Hair, Pajama Pants + Socks With Sandals