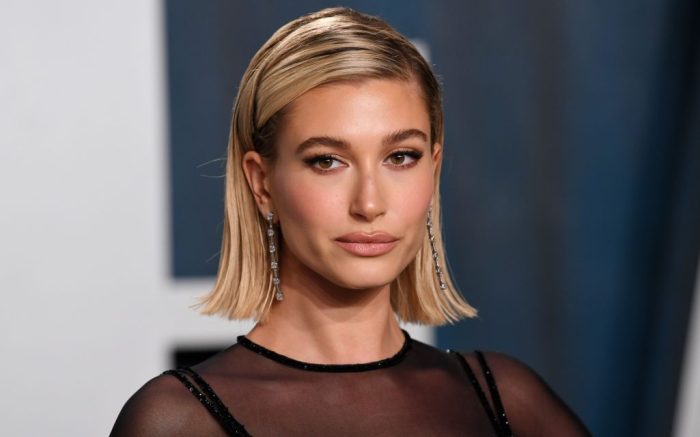 The 23-year-old model appeared on husband Justin Bieber’s Instagram Stories on May 3 wearing a dressed-down look. She teamed a cropped pastel green tank top, which appeared to be from Brandy Melville, with black leggings.

For footwear, the “Drop the Mic” co-host selected Adidas Yeezy Boost 350 V2 sneakers. From Kanye West’s buzzy ongoing Adidas collaboration, the shoes appeared to be in the “Linen” colorway, which debuted last month. As with other 350 V2 silhouettes, the “Linen” model features a cushioned midsole, a Primeknit upper and a gum outsole. Initially priced at $220, the shoes are sold out at retail now. However, pairs can be purchased on StockX.com in the $280 price range.

Baldwin accessorized her ensemble with gold hoop earrings and Garrett Leigh glasses. She was seen sipping an iced coffee in the video, which was filmed as she and Bieber quarantine together in his home country of Canada.

Baldwin’s wardrobe includes plenty of sneakers, and among her favorites are Nike Air Force 1s, Adidas Continental 80s and Vans Old-Skools. Additionally, the 2017 FN Style Influencer of the Year owns affordable footwear from the likes of Dr. Martens and Ugg.

While her closet includes plenty of kicks, Baldwin has been spotted in Yeezy 350s before. She selected the silhouette in the “Clay” colorway for an April 2019 workout class alongside supermodel pal Kendall Jenner. For the outing, Baldwin teamed her kicks with a white hoodie and pale pink Alo Yoga shorts.