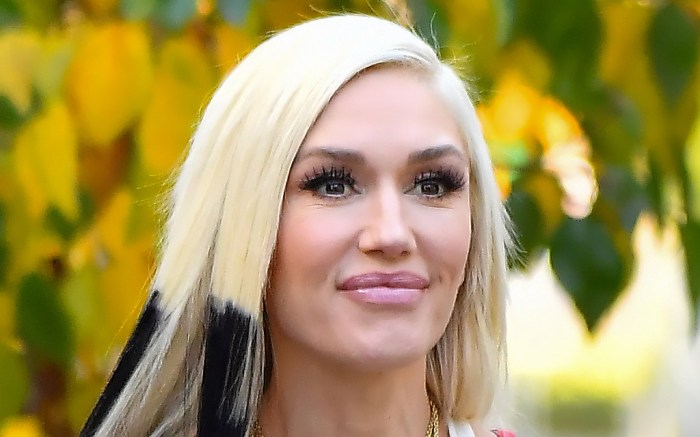 Gwen Stefani channeled her newfound country roots this week as she went cowgirl-chic with her fiancé and country singer, Blake Shelton.

Together, the duo showed off their western-inspired looks on the set of ‘The Voice’ last night. While Shelton kept with his regular attire in a checkered shirt and jeans, Stefani added a bit more flair in her green and black button-down shirt and matching black fringed shorts. While her outfit did include a traditional cowboy hat, the “Hollaback Girl” made sure it also included a touch of her own style with fishnet tights and bold boots.

The neon pink pair came coated in a bright metallic finish, hitting about mid-calf in a cowboy boot-style silhouette.

Earlier in the week, again while filming for her NBC talent competition, Gwen Stefani channeled a whole different vibe for her performance with contestant Carter Rubin. With a little help from designer Christian Siriano, the No Doubt alumna took the stage in a couture twist on a Christmas tree costume.

The look came complete with a dramatic tulle skirt coated in glittering red ribbon with a structured green bralette to match and a bow headband to seal the deal.

Though her footwear couldn’t be seen under the voluminous gown, the singer’s style when it comes to shoes can be described as punk rock-chic, always including a twist of glam. Whether she’s in Sophia Webster butterfly sandals or Crocs camouflage clogs, the “Sweet Escape” singer knows how to pull off an unexpected style. Her go-to brands include Gucci, Philipp Plein, Vans, Paris Texas and more when it comes to footwear.

In addition to modeling designers to fit her own unmissable fashion sense, the “Sweet Escape” songstress also introduced her own line of apparel L.A.M.B. in 2003 and has partnered with L’Oreal, Revlon and Tura GX for campaigns and collaborative collections. Stefani’s career has also extended into the television world with a role judging new musical talent on “The Voice” once more this season alongside her new fiancé Blake Shelton as well as Kelly Clarkson and John Legend.

Wow like Gwen Stefani in these bold pink boots inspired by her country-chic look.

Click through the gallery to take a look back at Gwen Stefani’s best and boldest street style looks throughout her career.