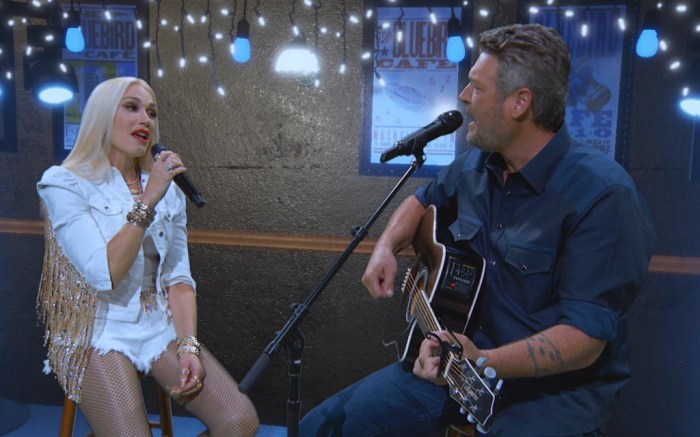 The No Doubt musician is set to perform alongside Blake Shelton during tonight’s socially-distanced show. Ahead of the air time, Stefani took to social media to show off a look at her performance-ready ensemble. The outfit teamed a custom Retrofête white denim jacket coated in gold fringe with matching white denim cutoff shorts from the brand; the bottoms were layered over a pair of the singer’s favorite style of legwear, fishnet tights.

The “Rich Girl” singer then topped the outfit off with thigh-brushing gold metallic boots, set atop a lifted heel.

The gold boots bear a strong resemblance to Giuseppe Zanotti’s metallic croc-embossed boots; the style features a pointed-toe finish and a 4.1-inch block heel. Similar designs can be found for $2,095 at Farfetch.com.

The 2020 ACM Awards air live on Sept. 16 on CBS. Keith Urban will be hosting the show for the first time. The country music star is set to take the stage at the Grand Ole Opry House in Nashville. Additionally, for the first time in seven years, Taylor Swift leads the impressive lineup of performances for the show, many of which will take place with distanced precautions at the Grand Ole Opry House and the Ryman Auditorium in Nashville. Other performers include of course Blake Shelton with Gwen Stefani along with Trisha Yearwood, Tim McGraw, Carrie Underwood and more.

As for Gwen Stefani herself, the singer’s style can be described as punk rock-chic, always including a twist of edge. Whether she’s in Sophia Webster butterfly sandals or Crocs camouflage clogs, the “Hollaback Girl” songstress knows how to pull off an unexpected style. Her go-to brands include Gucci, Vans, Casadei and more when it comes to footwear. She also introduced her own line of apparel L.A.M.B. in 2003 and has partnered with L’Oreal, Revlon and Tura GX for campaigns and collaborative collections.

Click through the gallery to see more of Gwen Stefani’s chicest street style looks over the years.