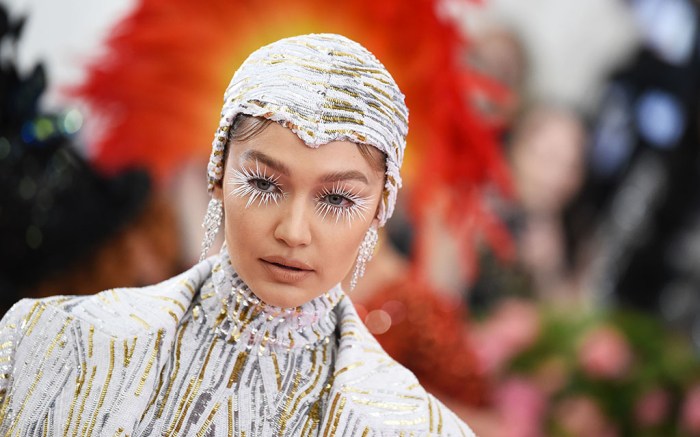 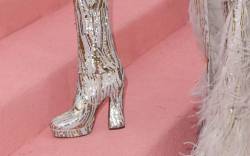 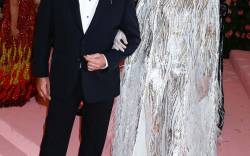 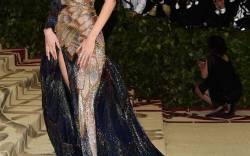 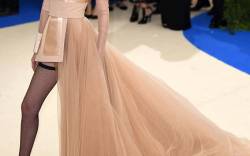 In less than a week, Gigi Hadid may have walked the red carpet for the fifth consecutive year at the highly-anticipated Met Gala — and if reports are true — she would have been sporting a baby bump.

However, fashion’s biggest event was canceled last month due to the coronavirus pandemic. The benefit was originally scheduled for May 4.

Though we won’t be seeing Hadid, or any stars for that matter, walking the famed  Metropolitan Museum of Art steps, why not take a look at the model’s enembles through the years.

The theme was “Camp: Notes on Fashion” and Hadid committed. The supermodel went with a head-to-toe ensemble from Michael Kors Collection for the event. Her sequined silver, white and gold jumpsuit consisted of glittered hat, made by Stephen Jones, and a feathered train. She added to the outfit with fake silver eyelashes and platform boots that truly brought out the glam.

In 2017, Hadid made more headlines for dying her usual blonde hair a warm caramel to match her outfit for the event than her actual look (which was just as headline-worthy). In an evening filled with outrageous, avant-garde fashion in honor of the “Rei Kawakubo/Comme des Garçons” theme, Hadid chose to team with Tommy Hilfiger for a custom look that was inspired by textures and structural lines from the designer’s archives. The model accessorized with fishnet stockings and Christian Louboutin pumps.

It was date night for Hadid and boyfriend Zayn Malik, who made their red carpet debut as a couple at the benefit. The two made the most out the “Manus x Machina”–themed Met Gala, wearing futuristic ensembles. Hadid wore a custom design by Tommy Hilfiger, featuring an embellished corset dress, which was inspired by old Hollywood and fusing that with the idea of modern machinery. Malik, put at twist on Versace’s classic suit with robotic-like arm detailing.

For the model’s first Met Gala appearance, she wore a deep-v Diane von Furstenberg gown, which was made for the “China: Through The Looking Glass” theme. Hadid paired the high-slit ensemble with matching red Christian Louboutin strappy stilettos.