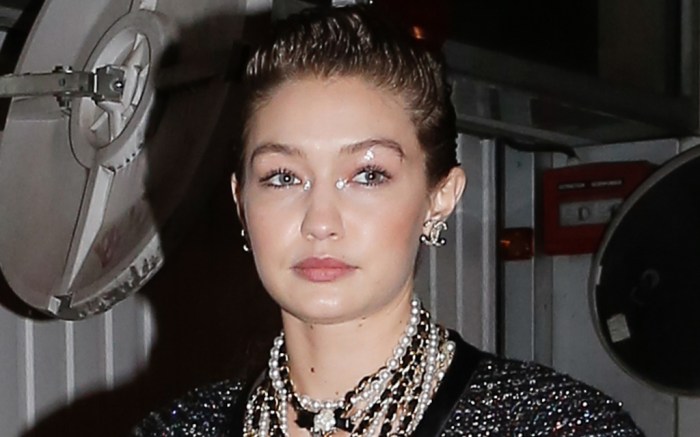 Gigi Hadid returned to the modeling scene this morning as she revealed her campaign for Alexander Wang’s fall ’20 collection.

The 25-year-old shared her first professional photoshoot since the birth of her daughter with musician Zayn Malik in September. For the modeling session, the new mom donned pieces from Wang’s newest release in a mix of seasonal styles. In one look, Hadid stayed on-trend in a sheer overcoat teamed with a classic white T-shirt and $325 high-rise mom jeans, available at Farfetch.com.

When it came down to footwear as well, the model kept up with 2020’s biggest trends in thong-toe sandals.

Hadid’s thong sandals weren’t your typical pair either. The new style from Alexander Wang comes set atop an over 3-inch heel with a square-toe front and the standout element of feather-coated uppers. Titled the Ivy silhouette, the heels retail for $1,591 courtesy of Farfetch.

Thong-toe footwear returned to the celebrity scene as one of spring and summer’s biggest trends. Be it classic flip-flops or thong-toe heels, the minimalistic silhouette falls in line with a ’90s-inspired revitalization of fashion, as seen with shoes like square-toe styles and pops of neon color. Stars Gigi Hadid herself along with Meryl Streep, Gabrielle Union and Kim Kardashian amongst other major names are continued to support the trend in cooler temperatures.

In another look for the American label, Hadid posed in a puffed leather jacket teamed with checkered pants and zebra-print flat mules. The model also slipped on the same shoes for a third look for the shoot, a tailored yet oversize suit combination with a cinched belt finish.

The fall-chic photo shoot is just one of many completed by the supermodel in her lifetime. Hadid previously starred in campaigns for the biggest names in fashion, from Versace to Tom Ford and Burberry and even Chanel, too. She has walked runways in every season for the past few years in both womenswear and menswear collections, modeling cozy looks for Marni and wild designs for Jeremy Scott.

In 2016, she became an ambassador for Tommy Hilfiger before working on a series of collaborative collections with the designer in 2017 and 2018. She also serves as an ambassador for Reebok, wearing endless sneakers and athleisure styles in the brand’s campaigns, in addition to partnering with jewelry brand Messika.

For fans of the thong sandal trend, here are a few bold ways to try out the silhouette inspired by Gigi Hadid’s ensemble.

Click through the gallery to discover more of Gigi Hadid’s best on-trend looks throughout the years.