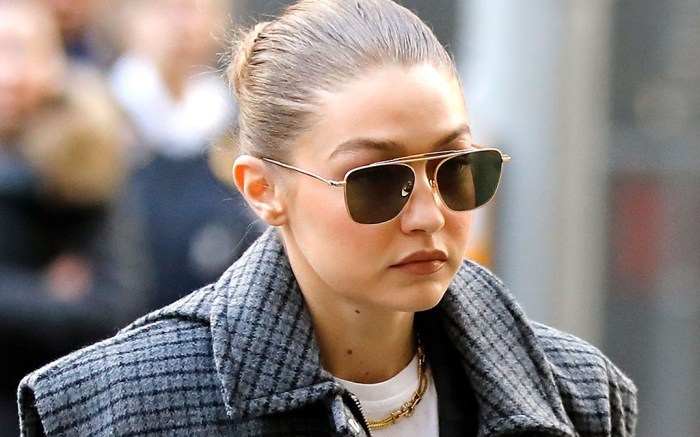 Gigi Hadid is the chicest potential juror in the bunch.

The supermodel was spotted en route to court in New York this morning, Jan. 16, wearing a stylish look with shades of black and gray.

Hadid sported a Ganni checked wool vest ($294 on Farfetch.com) layered over a black blazer and white T-shirt. On the bottom, she wore the Kirk jeans from a denim collaboration her stylist, Mimi Cuttrell, did with 3×1; the style is available from Revolve.com for $265.

On her feet, Hadid wore black boots. The pair she chose appeared to be fabricated in leather; they featured a flat sole and a pointed toe.

The supermodel completed her look with a Ralph Lauren tote bag and aviator sunglasses. She wore her hair slicked back in a bun and carried a Starbucks coffee cup for the ultimate city-dweller-on-the-go finish.

Hadid was called in as a potential juror in the case against Harvey Weinstein, the embattled film tycoon who has been accused of assault by multiple women. According to reports, Hadid has been dismissed from the juror pool following her appearance today.

When it comes to her typical off-duty style, Hadid can often be found in casual clothing. The “It” girl frequently sports footwear from Reebok, for which she is an ambassador, as well as styles from Dr. Martens and Charles & Keith.

Click through the gallery to see more of Gigi Hadid’s style.