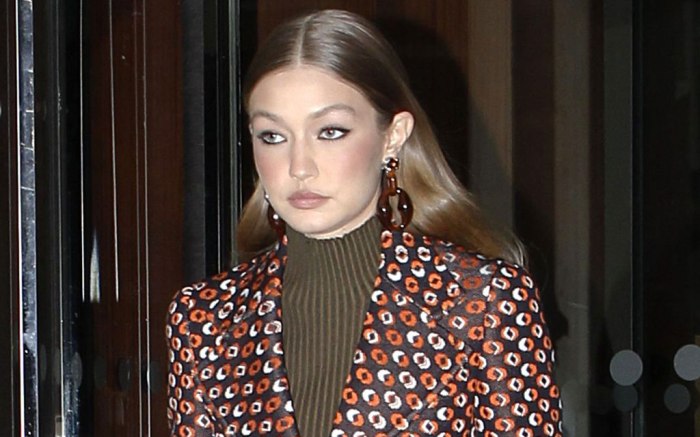 Gigi Hadid made the streets of Paris her runway today as she stepped out for a Prada party during Paris Fashion Week Men’s.

The supermodel wore a printed look complete with accessories in tan, a colorway that’s trending big time this season. Hadid sported an embroidered skirt-suit from Prada. The set had a matching pattern on top and bottom with mixed but complementary, warm colors, including chocolate and light browns as well as mustard, white and red. She layered an olive green turtleneck under her jacket.

On her feet, the catwalker sported tall boots in a tan colorway. The boots featured a chunky heel and an almond toe; they appeared to be made of leather. The shoes matched the rest of Hadid’s Prada leather goods: a belt and a handbag.

Earlier today, Hadid sported a different set of high boots as she walked the runway for Lanvin. Her look for the show included a black dress with a cape on top and slouchy white boots with a black accent at the toe.

When it comes to her off-duty style, Hadid can often be spotted in casual wares, including sneakers from Reebok (she is an ambassador for the brand) and boots from Dr. Martens. For formal appearances, she can be found in heels from labels such as Tom Ford and Fendi.