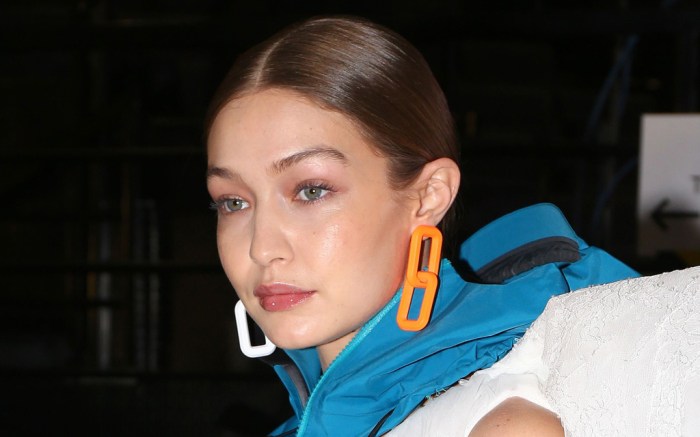 Gigi Hadid unveiled the first true look at her growing baby bump today in the most high-fashion way.

The model posed for a special editorial-style black and white photoshoot in a series of bump-hugging looks, all revealed in three posts on her social media accounts this morning. The 25-year-old is currently expecting her first child with beau and former One Direction member Zayn Malik.

The outfits featured in the stunning shots included a flowing semi-sheer chiffon minidress as a well as a white draped design that billowed and flowed down to sweep the floor as Hadid gently posed on the ground. The captions for the posts as well ranged from “growin an angel” to “cherishing this time. appreciate all the love & well wishes will never forget creating these special images with my friends.”

cherishing this time. appreciate all the love & well wishes ♡ will never forget creating these special images with my friends @luigiandiango @gabriellak_j @erinparsonsmakeup thank you. I love you!

Hadid confirmed her pregnancy at the end of April in an interview with Jimmy Fallon and has since continued to post on social media but with no photos of her growing baby bump until today.

Though this photoshoot held a more personal touch, it is just one of the many shoots completed by the supermodel in her lifetime. Hadid previously starred in campaigns for the biggest names in fashion, from Versace to Tom Ford and Burberry and even Chanel, too. She has walked runways in every season for the past few years in both womenswear and menswear collections, modeling cozy looks for Marni and wild designs for Jeremy Scott.

In 2016, she became an ambassador for Tommy Hilfiger before working on a series of collaborative collections with the designer in 2017 and 2018. She also serves as an ambassador for Reebok, wearing endless sneakers and athleisure styles in the brand’s campaigns, in addition to partnering with jewelry brand Messika.

Click through the gallery to find even more of Gigi Hadid’s best style moments over the years.