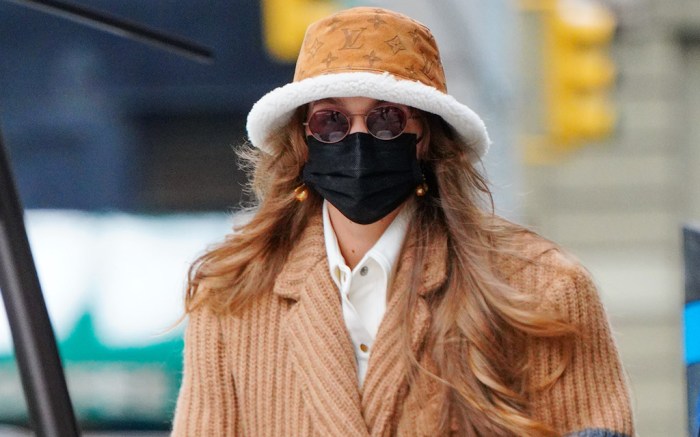 For a Saturday afternoon walk with her newborn daughter, Gigi Hadid shared her third outfit this week while taking a stroll through SoHo in New York City.

During her outing to Louis Vuitton and the Ralph Lauren Polo stores, the model wore a beige knit coat with a double-breasted silhouette and a maxi length. It featured a striped pattern down the sides with slits and a banded detail along the left arm.

She styled the trendy floor-length overcoat with a white collared button-down blouse and medium-wash jeans.

For footwear, the Victoria’s Secret alumna opted for a pair of chocolate brown combat boots. The shoes’ yellow stitching indicates that they are a style from the iconic British boot company, Dr. Martens. The label’s 1460 Crazy Horse Lace-Up Boots in the Gaucho colorway offer a strikingly similar aesthetic. These lookalike boots feature the company’s signature 8-eye design with a full leather construction, an air-cushioned sole, grooved sides, and its signature yellow heel tab. The shoes retail for $160 and are available for purchase on drmartens.com.

Hadid accessorized the neutral outfit with a color-coordinated Louis Vuitton bucket hat that featured a white shearling lining and the luxury label’s monogram detailing throughout. The 25-year-old finished off the look with a black face mask while carrying her daughter in a white stroller from Bugaboo Lynx. It retails for $899 and is available for purchase on amazon.com.

This daytime sighting comes on the heels of Hadid daughter’s first snowstorm experience earlier this week. To celebrate the milestone, the street style icon shared a photo of the duo on the covered streets this past Friday. For the occasion, Hadid wore a black floor-length coat with a grey scarf, featuring white and maroon detailing, white pants, a black boy cap, and trendy white boots.

On Dec. 15, the former Vogue cover star made their first mother-daughter major appearance since the newborn’s birth. For the outing, Hadid chose a similar ensemble and teamed a nearly-identical black coat with black pants, a Brixton boy cap, and a pair of now sold-out Dr. Martens Geordin boots.

Embrace the model’s favorite shoe trend with these similar combat boot styles, below.

Click through this gallery to see how Gigi Hadid & other celebrities wear their favorite boots.