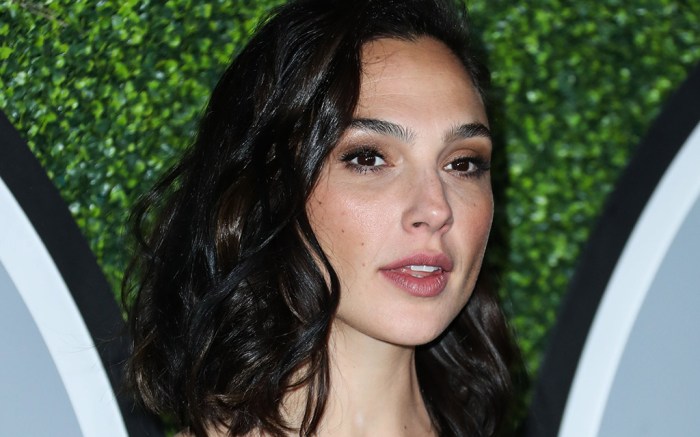 In normal times, Gal Gadot would have probably hit multiple countries by now for the world premiere of “Wonder Woman 1984.” But like everything in 2020 — nothing is normal.

The actress, however, has been doing as much virtual press she can to promote the sequel to her 2017 box office hit “Wonder Woman,” including stops at “Good Morning America,” “The Graham Norton Show,” and “The Tonight Show Starring Jimmy Fallon.” Her new movie is set to be released on Dec. 25 in theaters and on HBOMax. And while most of her appearances have been from the waist up, behind-the-scenes, she’s being giving full looks.

For instance, at the MTV Movie & TV Awards this month, she wore a pair of towering red leather Sergio Rossi pumps with a Louis Vuitton mini dress.

Stylist Elizabeth Stewart has been key to Gadot’s virtual press tour style and she’s to thank for the welcomed pops of color you may be seeing on your television screens.

In one of her best looks to date, Gadot donned a Patou technicolor 3D minidress. It’s truly unfortunate we couldn’t see the entire head-to-toe look on a red carpet. The exaggerated ensemble was detailed in multicolored recycled cady material in a psychedelic-style print, with a high neck, circular cuffs with topstitching as well as a topstitched hem for extra volume.

In another waist-up wow moment, Gadot dressed in Prada. She wore a double-breasted jacket and underneath a Prada sweater vest with a matching printed shirt, which was paired with a bright yellow neck tie. On her feet was a pair of black Ugg boots as comfort comes first these days. (Swipe below to see.)

Most recently, the actress made an appearance on “Jimmy Fallon,” wearing a Christopher Kane piece that would have surely been the ultimate holiday look this year as it was detailed with dangling chain embellishments from her shoulders.

In another high-fashion moment, Gadot was seen in a red head-to-toe Saint Laurent outfit for another day of press. The ensemble featured a one-button blazer with a white wide-collared shirt underneath paired with matching red trousers and patent leather pumps, which gave off major ’70s vibes.

To see more of Gal Gadot’s head-turning style on the red carpet, click through the gallery.