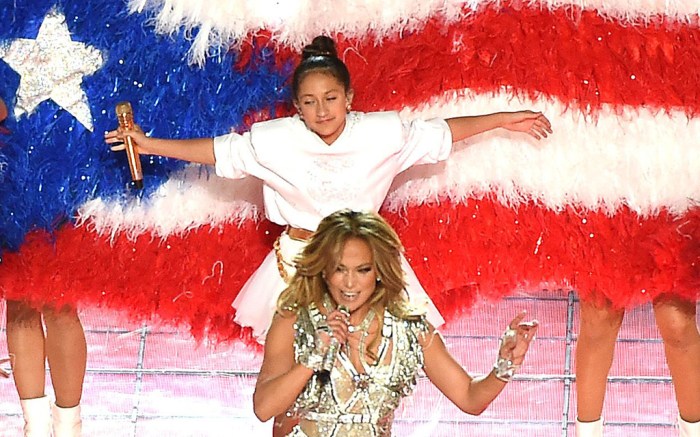 It was a heartwarming moment onstage at the 2020 Super Bowl Halftime Show at Miami’s Hard Rock Stadium tonight when Jennifer Lopez brought out a very special guest: her 11-year-old daughter, Emme Maribel Muñiz.

Emme held her own on arguably the world’s biggest stage, surprising the audience with her strong vocals as she stepped out to perform two songs, her mother’s hit “On the Floor” and “Born in the U.S.A.,” the Bruce Springsteen classic. She wore a white sweatshirt with sparkling accents and a tulle skirt. For shoes, the middle schooler chose a pair of white combat boots by Versace.

The youngster’s vocal prowess shouldn’t come as a big surprise to fans, though: After all, Lopez shares Emme with fellow music legend Marc Antony. Emme’s twin brother, Max, watched the action from the wings.

Meanwhile, Lopez herself wore a series of show-stopping Versace looks — an unsurprising choice since she stars in the brand’s spring ’20 ad campaign. Of course, she also appears in campaigns for two other fashion labels this season: Coach and Guess.

J-Lo was a co-headliner this year, performing in tandem with “Hips Don’t Lie” singer Shakira. The Colombian star brought her A-game in a shimmering red two-piece set by Dundas, which came with sparkling knee-high boots.

This year’s Super Bowl contenders are the San Francisco 49ers and the Kansas City Chiefs.

Click through the gallery to see more from the 2020 Super Bowl Halftime show.