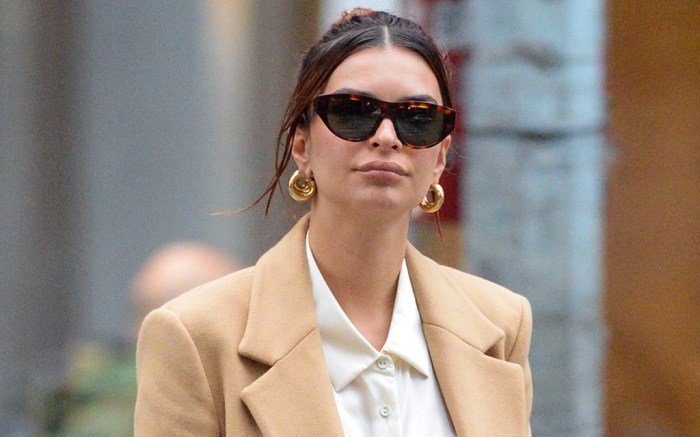 Emily Ratajkowski announced her pregnancy earlier this week and is already on top of the maternity style game.

The mom-to-be, who is expecting her first child with husband Sebastian Bear-McClard, stepped out in New York yesterday and revealed her baby bump in a chic way. Layering in a stylish fall trench coat, the model kept the bottom of her shirt unbuttoned, allowing her growing bump to peep out over her low-rise mom jeans.

To bring her fall style up a level, EmRata included a set of trendy boots. The slouchy knee-high pair featured a croc-embossed leather upper atop a pointed toe and a towering stiletto heel. The design resembles pairs from Paris Texas, a former FNAA Winner and a label Ratajkowski herself has sported frequently in the past. This specific silhouette comes atop an over 4-inch heel and a price tag of $815 at Fwrd and Olivela.

The “We Are Your Friends” announced the news of her pregnancy through a virtual cover shoot with Vogue on Monday. In a caption on Instagram, she wrote: “Grateful & growing 👼 Thank you @voguemagazine for this very special cover.”

Grateful & growing 👼 Thank you @voguemagazine for this very special cover.

In addition to her brown boots, EmRata owns a long list of light-colored sneakers that she prefers for her outdoor excursions. Oftentimes, she favors all-white pairs from the likes of Nike, Reebok, Adidas or Veja. If she decides to spruce it up with a more colorful style, you can find the “I Feel Pretty” star in her new beloved Keds skate shoes, Bottega Veneta heels or her favorite red Celine snakeskin boots. Most recently, the model debuted a series of standout sneakers courtesy of Travis Scott’s must-have Nike collaborations.

As for design herself, Ratajkowski founded her Inamorata line of intimates in 2017 before she expanded it to become Inamorata Woman, including a wider variety of pieces like apparel, swimsuits and more. Beyond modeling pieces from her own collections, the 29-year-old has starred in campaigns for DKNY, The Kooples and Jason Wu, among others.

Click through the gallery to discover more of Emily Ratajkowski’s chic off-duty style moments throughout the years.