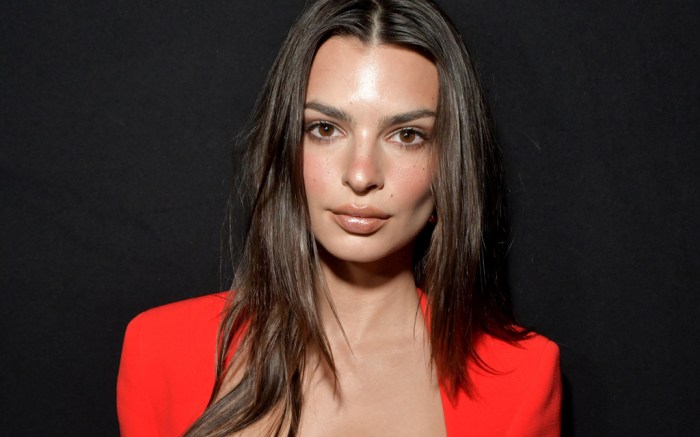 Emily Ratajkowski is making her own fun in quarantine in an unconventional way.

The 28-year-old “Lying and Stealing” star married her dog, Colombo, to her friend Joshua “The Fat Jew” Ostrovsky’s pup, Happy. For the dog wedding, Ratajkowski was clad in a slinky minidress that appeared to be fabricated in satin.

For footwear, the Inamorata designer went with the Adidas Originals Samba in white. Born on the soccer field, the Samba features a soft leather upper with suede overlays and a rubber sole. The Samba is available (although not in the exact colorway chosen by Ratajkowski) for $90 on Fwrd.com.

“Quarantined together so why not marry our children? They love each other so much. Congrats Happy and Colombo 💍🎩✨5.2.20,” Ratajkowski captioned a series of photos from the big day shared to her Instagram account. The influencer’s post received nearly 250,000 likes within 14 hours.

The Adidas Originals Samba is one of the model’s favorite shoe styles, which she pairs with everything including cargo pants and minidresses. In addition to owning the style in the white colorway, the A-lister also owns the kicks in a white and black palette.


A big fan of white sneakers, Ratajkowski also frequently sports the Nike Air Force 1, the Veja Esplar and the Nike Cortez. In addition to kicks, her off-duty wardrobe includes boots from the likes of Celine, Zara and Magda Butrym. On the red carpet and for other events, the “Gone Girl” actress unsurprisingly upgrades her look with high heels, choosing silhouettes from designer labels such as Merah Vodianova, Jimmy Choo and Jacquemus.

Click through the gallery to have a look at Emily Ratajkowski’s chic dog walking outfits.