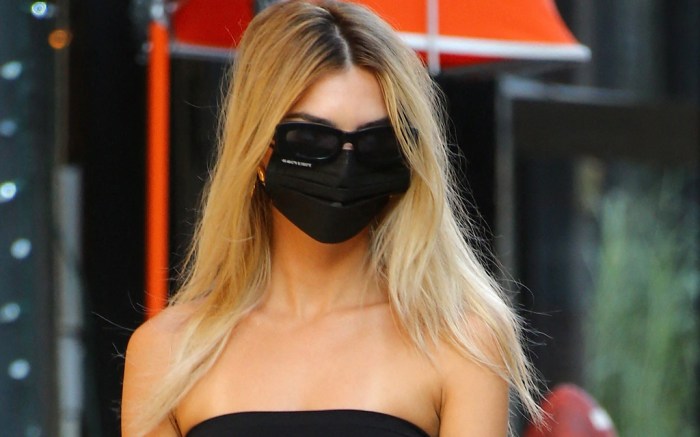 Emily Ratajkowski continued her streak of pairing sneakers with dresses as she stepped out in New York yesterday.

The 29-year-old was spotted in New York’s Tribeca neighborhood clad in a bodycon black dress with a strapless neckline and a midi hemline. She teamed the dress with dark sunglasses and an all-black “Milan” face mask from Evolve Together; a pack of seven can be purchased on the brand’s site for $8.75. The “Lying and Stealing” actress carried a sold-out orange lizard-effect handbag from Hunting Season.


For footwear, Ratajkowski selected her longtime favorite, the Veja Esplar. Crafted with leather tanned and sourced according to REACH norms, the Esplar features a lining made from organic cotton, and its soles are constructed from wild (as opposed to farmed) Amazonian rubber. Pairs are available to shop on Nordstrom.com now for $120.

Veja founders Sébastien Kopp and François-Ghislain Morillion launched their label in 2005 after meeting with organic cotton farmers and wild rubber tappers in Brazil two years earlier. The brand has grown in prominence since 2018, when Meghan Markle stepped out in the V-10 silhouette during a trip to Sydney, Australia. In addition to Markle and EmRata, other celebrity fans of the brand include Olivia Wilde, Katie Holmes and Reese Witherspoon.

When she’s not in her Veja Esplars, Ratajkowski has reached for similarly all-white sneakers from the likes of Nike, Asics and Adidas. For red carpets and talk show appearances, the “Gone Girl” star unsurprisingly upgrades her look with heels, having previously selected pairs from Jimmy Choo and Merah Vodianova. To put together her on-duty looks, Ratajkowski consults celebrity stylist Emma Morrison, who also counts Lily Aldridge, Martha Hunt and Rosie Huntington-Whiteley as clients. The model also has her own brand, Inamorata, which offers women’s styles including bathing suits as well as ready-to-wear pieces.

Below, we’ve rounded up more sleek white sneakers that offer a similar look to Ratajkowski’s choice.

Click through the gallery for a look at more ways Emily Ratajkowski styles her white sneakers.