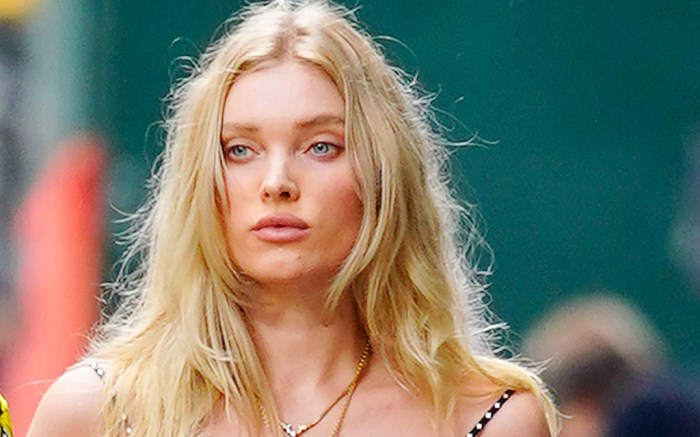 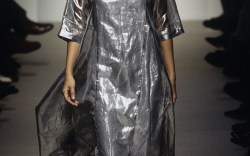 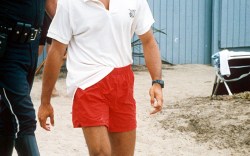 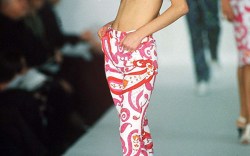 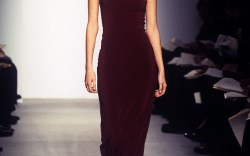 Looking for styling tips for summer flip flops? Take a cue from Elsa Hosk. The model showed off her beachy ensemble this week with a post on Instagram featuring a pair of platform sandals. The thong-style may be reminiscent of the ’90s trend (it was designed with a platform sole by London designer Ducie), but it has a current flair thanks to its chunky silhouette.

Retailing for just under $200, the flip flops are detailed with thick white leather straps and includes a black outsole. Hosk gave the look a 2020 update by pairing it with a green tie-dye wrap dress from Revolve brand hours that’s priced at $218. She accessorized with Miu Miu cat eye sunglasses and a mini Louis Vuitton speedy bag in white multicolor monogram print.

While flip flops are known as a go-to beach and easy summer style, the sometimes-considered “ugly” silhouette was once a popular fashion trend in the ’90s. Thanks to celebrities wearing the look on red carpets and designers sending platform thong sandals down the runway, the shoes received high fashion praise. Just look at Amber Valletta wearing white flatform flip-flops at the Dolce & Gabbana spring ’97 show or Gwen Stefani’s fluffy bikini top and white platform flip-flops at the 1998 MTV Video Music Awards, for instance. Plus, in its 1997 heyday the platform flip flop was worn by the Spice Girls and Jennifer Aniston on “Friends.”

The trend continued into the early 2000s as “it” girls such as Paris Hilton, Britney Spears and Lindsay Lohan often wore the look paired with other of-the-moment trends, including Juicy Couture sweatsuits, bootcut jeans and midriff-baring tops.

Now, the look remains as versatile as ever. Comfort is a major selling-point, and according to star stylist Elizabeth Saltzman, height is always a good thing. “In the late ’90’s, I remember them coming out and thinking “What’s this?!” I immediately bought that first pair then a couple months later I started to search for a second, third and forth pair and so on,” she said, after creating her own platform flip-flop collection with Rocket Dog in 2017. “As much as I like looking forward, I also love a bit of nostalgia. It’s fun to revisit the ’90s.”

To see flip flops from the 1980s through the 2000s, click through the gallery and keep scrolling to shop similar Elsa Hosk styles.