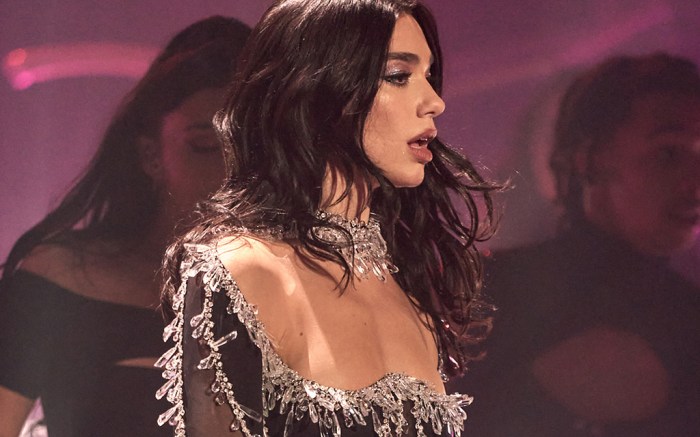 Dua Lipa pulled out all the stops for her virtual concert over the holiday weekend. The singer headlined her own livestreamed show, called Studio 2054, which has since garnered more than 5 million viewers, according to Dua Lipa.

For the event, she wore multiple looks from Attico, Alexander Wang and Versace, but what turned heads most was this custom bodysuit by Mugler.

The sheer ensemble was detailed with hundreds of crystals embroidered on the fabric that covered the “Don’t Start Now” singer from head to toe. She paired the look, which she wore to close out the show, with black block-heeled booties.

During the concert, Dua Lipa could also be seen wearing Puma sneakers paired with an embellished Versace bra.

The athletic giant announced on Nov. 17 that it signed a multiyear deal with the singer-songwriter, who will be the face of its women’s business. Aside from boosting the profile of Puma’s women’s business unit, Lipa will work to “help inspire women around the world” through global campaigns and “important inclusive initiatives close to her heart,” according to the company. In addition, Puma sponsored Lipa’s Studio 2054 virtual performance and dressed not only will the pop star, but also her dancers be in Puma gear.

Other special guests that appeared in the show, including Miley Cyrus, Kylie Minogue, Elton John and Bad Bunny.

Dua Lipa is coming off an exciting month with more major milestones. She is nominated for six Grammys at the upcoming awards show, including Album of the Year, Song of the Year and Record of the Year. She won Best New Artist at the Grammys in 2018.

To see more of Dua Lipa’s style, click through the gallery.