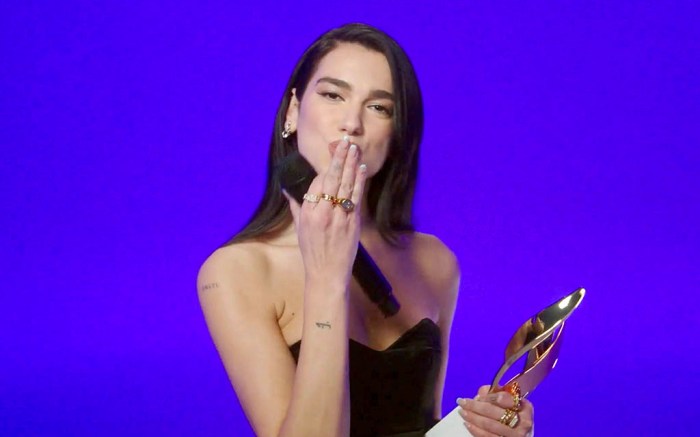 Dua Lipa took to the virtual stage for the 2020 Billboard Women in Music Awards as she performed her hit song, “Boys Will Be Boys.”

The British singer sang a stripped-down version of the track from her newest album stood in front of a blank backdrop. For the event, Dua Lipa went glam in a strapless black gown complete with a sweetheart neckline and a voluminous tulle-covered skirt that swept across the floor; the eye-catching design comes from Giambattista Valli and is recycled from the brand’s spring ’16 collection.

“Thank you for having us open the show and allowing me to perform a song that means so much to me and that I probably wouldn’t have had the chance to perform like this for any other occasion,” wrote the singer in her caption on Instagram today.

Though her shoes of choice couldn’t be seen underneath the elongated hem of her gown, Dua Lipa is known for her edgy taste in footwear. In fact, the “Don’t Start Now” channeled the edgiest side of disco-chic style this weekend as she performed for the French radio station’s NRJ Music Awards.

Taking place on Sunday, Dua Lipa opted for bold on-stage attire including a matching embellished bralette and briefs set; the pieces came layered with a mesh finish and a set of high-rise fishnet tights. The final touch for her outfit came with her choice of sky-high platform booties, set with a towering block heel; the black shoes appeared to measure over 5 inches in height with a sleek satin finish.

Beyond a Grammy Award-winning music career (and an impressive six new nominations for the upcoming 2021 Grammy Awards), Dua Lipa dips her toes in the fashion world quite often. From sitting from rows at major shows during Fashion Month to selecting daring duds for red carpet appearances, she keeps things regularly exciting. The “New Rules” singer previously appeared in campaigns for YSL Beauté and Fragrance, Adidas and Pepe Jeans amongst others.

Most recently, Dua Lipa signed on as a Puma ambassador with a multi-year deal as she serves as the face of its women’s business. Through her new title, Dua Lipa will aim to “help inspire women around the world” through world-wide efforts and “important inclusive initiatives close to her heart,” according to the company.

Click through the gallery to take a look back at Dua Lipa’s best red carpet looks of the past.