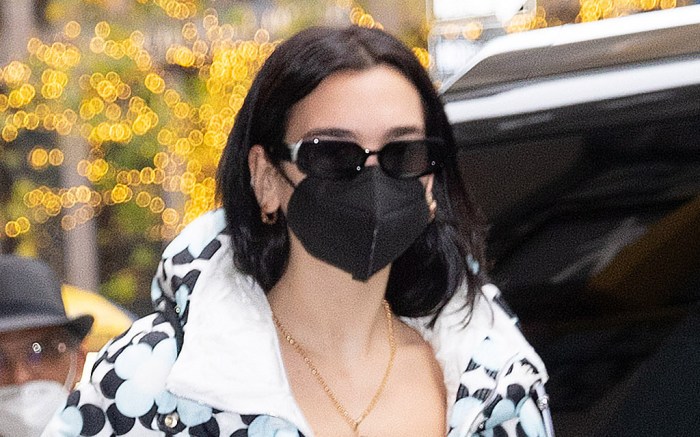 Dua Lipa headed to the NBC studios in style today for “Saturday Night Live” rehearsals ahead of her upcoming performance this weekend.

The “New Rules” singer wowed upon arrival in an unmissable ensemble courtesy of Richard Quinn’s collaborative collection with Moncler. The Moncler Genius designs debuted during Milan Fashion Week fall ’20 back in February and took the world by storm with their standout floral choices and strong hits of color.

Dua Lipa herself modeled a puffer coat and coordinating leggings from the collab, both of which have since sold out; for fans of the look, similar coats retail for $2,490 whereas the brands’ tights tend to sell for $580.

Beyond a Grammy Award-winning music career (and an impressive six new nominations for the upcoming 2021 Grammy Awards), Dua Lipa dips her toes in the fashion world quite often. From sitting from rows at major shows during Fashion Month to selecting daring duds for red carpet appearances, she keeps things regularly exciting. The “Don’t Start Now” singer previously appeared in campaigns for YSL Beauté and Fragrance, Adidas and Pepe Jeans amongst others.

Most recently, Dua Lipa signed on as a Puma ambassador with a multi-year deal as she serves as the face of its women’s business. Through her new title, Dua Lipa will aim to “help inspire women around the world” through world-wide efforts and “important inclusive initiatives close to her heart,” according to the company.

Click through the gallery to discover more of Dua Lipa’s standout looks over the years.