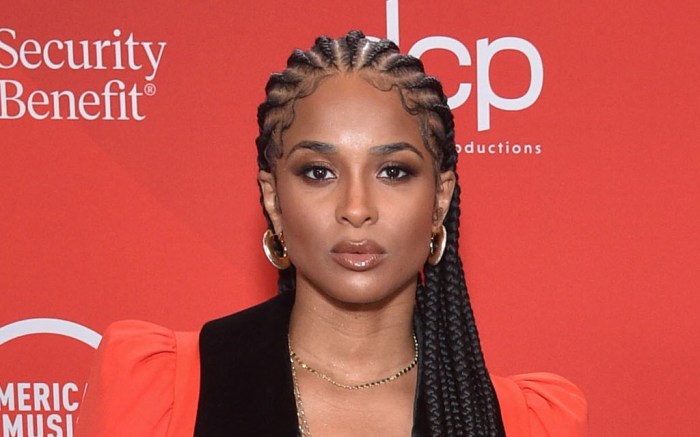 Ciara’s first red carpet appearance since the birth of her newborn son, Win, did not disappoint.

The hit singer stepped out for a night on the town as she attended the 2020 American Music Awards last night in Los Angeles. For the socially distanced event, Ciara opted for a stunning tuxedo-inspired gown from Balmain; the black and red design featured a low-dipping neckline with a high-leg slit and a floor-sweeping train.

On her feet, the “Level Up” songstress balanced out the high cut of her gown with her choice of Stuart Weitzman boots. The brand’s Katrina silhouette skims the thigh with its elongated shaft and shiny vinyl uppers. Set with a pointed toe and a slip-on appeal, the style comes set atop a 4-inch heel for an added lift. While the sleek black iteration of the designer boots are not currently available, a snakeskin version retails on-sale from $750 at Nordstrom Rack.

The singer gave birth to her son Win Harrison Wilson in July and was able to bring him home to an extravagant welcoming. Win is her second child with husband and NFL star Russell Wilson; the couple shares a daughter Sienna, 3, and Ciara also has a son, Future, 6, whom she shares with ex-fiancé rapper Future.

Throughout her pregnancy, Ciara continued to debut an endless series of chic maternity looks that ranged from at-home workout ensembles with throwback Nike Natural Ride Free RN sneakers to an all-black leather look from Patrycja Pagas matched to glittering sandals from Giuseppe Zanotti.

In addition to welcoming in their son in July, Ciara and her husband, NFL star Russell Wilson did their part and more to help combat the rippling effects from the pandemic this year. In March, the couple donated 1 million meals to Seattle food bank Food Lifeline. Wilson also partnered with Wheels Up America to go “Meals Up” and donate 10 million meals to Feeding America.

CLick through the gallery to discover more star-studded red carpet arrivals at the 2020 American Music Awards.