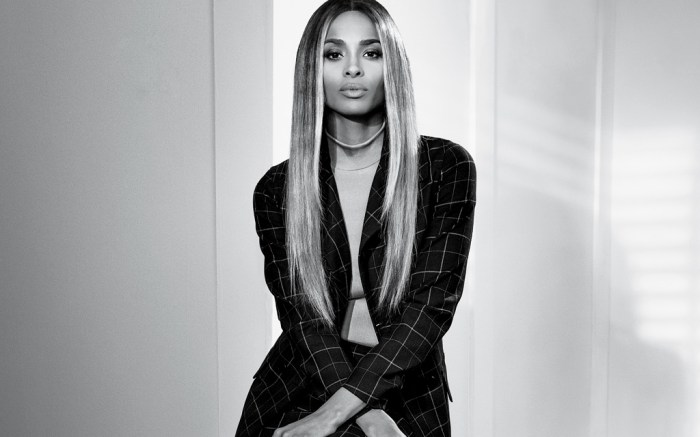 Ciara sent a powerful message in her new music video, “Rooted,” which celebrates Black excellence. The singer launched the video on Thursday morning and it’s all for a good cause.

A portion of proceeds from the song will be donated to Grantmakers for Girls of Color, a philanthropic organization dedicated to cultivating investments in support of girls of color in the U.S. The effort will help mobilize more resources to support Black girls and other girls of color as they pursue wellbeing, equity, and justice.

In the music video, Ciara can be seen baring her baby bump in multiple looks. She said that “Rooted” was shot two days before she gave birth.

(Ciara gave birth to her son Win Harrison Wilson in July. Win is her second child with husband and NFL star Russell Wilson; the couple shares a daughter Sienna, 3, and Ciara also has a son, Future, 6, whom she shares with ex-fiancé rapper Future.)

One standout outfit comes in the form of all-black leather. Ciara can be seen sitting on a chair with her oldest son, Future, and daughter Sienna, wearing black leather pants, a matching sports bra and a croc-embossed, cropped leather jacket. Ciara topped off the look with all-black Nike Air Force 1s and a mouth grill that spelled out “melanin” in gold. Sienna, meanwhile, can be seen in kids’ Fendi two-strap sandals.

The visuals in “Rooted” includes plenty of dancing and it put the Black Lives Matter movement on display, featuring tributes to Breonna Taylor and Eric Garner as well as Martin Luther King Jr.

“To all my young Rosa’s and Young Luther’s, keep marching. Don’t stop fighting for what you believe in. To all my black queens and kings, continue to plant and spread seeds of love, hope and pride in your tribe. Everything you need to survive and thrive is rooted in you,” the video reads. “Stay rooted.”