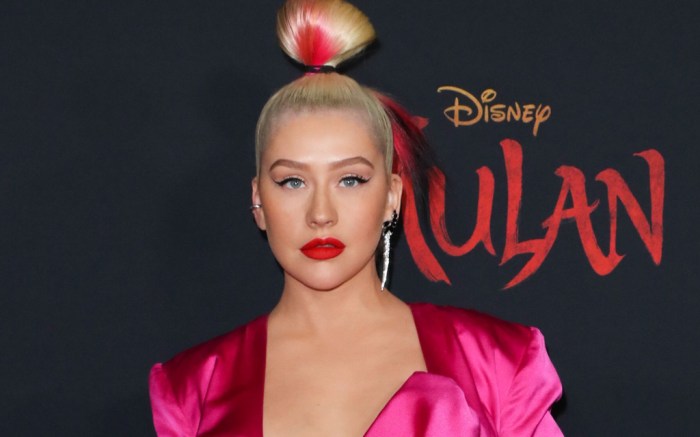 Christina Aguilera walked the red carpet for the premiere of “Mulan” in a pair of platform boots that could stop traffic.

The singer, who is the voice behind “Reflection” and “Loyal Brave True” for the new live-action film’s soundtrack, attended the Los Angeles premiere last night wearing a pink and red satin dress from Israeli designer Galia Lahav. The chic look showcased an oversize bow and a high slit. Aguilera even went so far as to match the color of her hair to her gown.

Her performance on the film’s soundtrack marks a full-circle moment for the artist, whose career debut song was the single version of “Reflection” from the original 1988 animated film.


The open cut of Aguilera’s dress revealed her dramatic, sky-high boots. The red latex platforms stretched well above her knee and skimmed her thigh with their formfitting shape. The style comes from Gina Shoes, one of the singer’s favorite brands for bold footwear both onstage and offstage. Platforms from the brand typically measure more than 5.5 inches high, giving Aguilera’s petite 5-foot-2 frame a serious boost.


The “Burlesque” star sported a similar pair of Gina boots when she was across the pond in London in September 2019. She wore the style, sans pants, with a pink Christopher Kane hoodie printed with an image of Marilyn Monroe that sold out for $575 on Farfetch.com.

In honor of the new film, designer Ruthie Davis also collaborated with Disney for a “Warrior” collection in honor of the new film. The capsule takes inspiration from the courage and fierceness of the star. The collection of heels, sneakers, platforms and booties is available for purchase exclusively on Ruthiedavis.com and at The Curated by Christian Siriano in New York with styles retailing from $398 to $898.

For those who appreciate bold footwear looks like Aguilera’s, take a chance on these red-hot styles.

Click through the gallery to see more stars who rocked thigh-high boots.