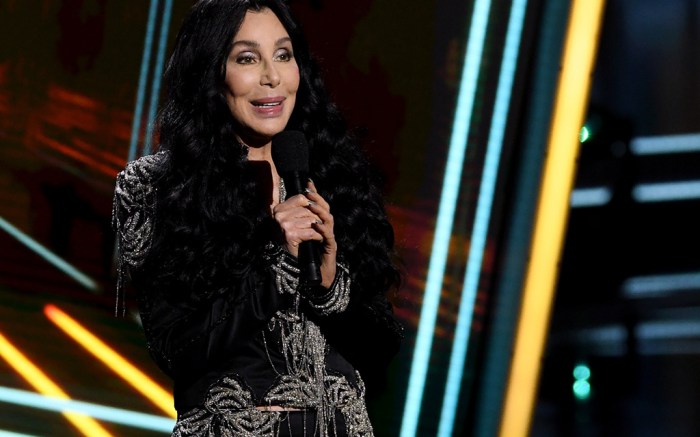 Cher made a rare in-person appearance on Wednesday night at the 2020 Billboard Music Awards and she didn’t disappoint. She was on hand to present Garth Brooks with the Icon Award, an honor she received in 2017.

For the occasion, Cher dazzled — literally — in a crystal-embellished ensemble. She wore a pair of towering platform Jimmy Choo sandals, detailed with sparkling gems, and a custom two-piece minidress by emerging designer Hilá.

Her look was inspired by a Spanish matador “suit of lights” and featured hand-embroidered chain embellishments and detailing that took more than 24 hours to complete. The black silk satin outfit incorporated the crystals to accentuate Cher’s figure as they can be seeing hanging from the shoulders and down the top’s lapels as well as on the matching skirt.

If I could turn back time, I wouldn't. Because @Cher is presenting at the #BBMAs TONIGHT, 8/7c on NBC. 🙌

“The Icon Award was created a decade ago to honor those outstanding artists,” she said on stage. “Their passion for music has made them legends in their own time and that perfectly describes Garth [Brooks.]  When I received my award in 2017, it was one of the greatest honors of my life. To know that I was receiving the same honor as Prince and Stevie Wonder just added to the thrill of it all.”

The 2020 Billboard Music Awards is airing live sans audience  from the Dolby Theater to celebrate the best in the music industry. Kelly Clarkson has returned to host the show for her third year in a row and Post Malone leads the nominees with 16 nods in 15 different categories. Lil Nas X follows suit with 13 nominations.

Shop these similar platform sandal styles below to elevate any ensemble.

See more style on stage at the Billboard Music Awards.