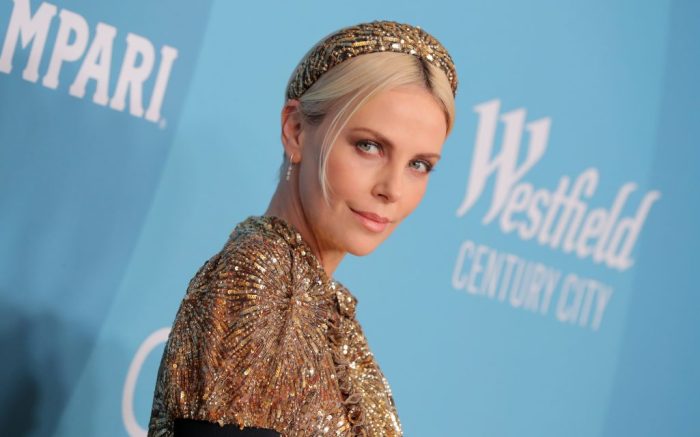 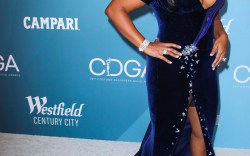 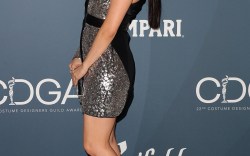 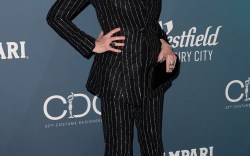 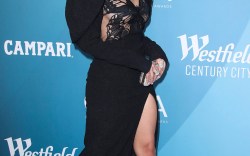 Charlize Theron was a winner at the Costume Designers Guild Awards last night — and she looked the part with her head-to-heel gold ensemble.

The “Bombshell” actress arrived at the Beverly Hilton in Beverly Hills, Calif., wearing a custom Louis Vuitton gown with long sleeves, gold sequins throughout and a cutout accent at the neck. She wore a headband to match the dress.

On her feet, Theron, the recipient of the CDG’s Spotlight Award, wore gold sandals that showed off her dark red pedicure.

Speaking to FN from the carpet, O’Hara said her favorite fashion moment on “Schitt’s Creek” is from the still-unreleased wedding episode. But her favorite shoes from the show have made several appearances.

“I had a great pair, which I didn’t take because they’re too wild for me. I can’t carry off clothes that my character can,” O’Hara said. “There was a pair of shoes I wore a couple times in the season, and the heels looked like rat spines. They were the scariest, most amazing shoes.”

Emerging victorious in the film categories were “Jojo Rabbit,” “Knives Out” and “Maleficent: Mistress of Evil.” In TV, “Schitt’s Creek,” “The Masked Singer,” “The Marvelous Mrs. Maisel” and “Game of Thrones” all received trophies. See the full list of winners below:

Excellence in Variety, Reality-Competition, Live Television
“The Masked Singer,” Season Finale: And the Winner Takes It All and Takes It Off — Marina Toybina

With contributions from Charlie Carballo

Click through the gallery to see stars on the red carpet at the CDGA.