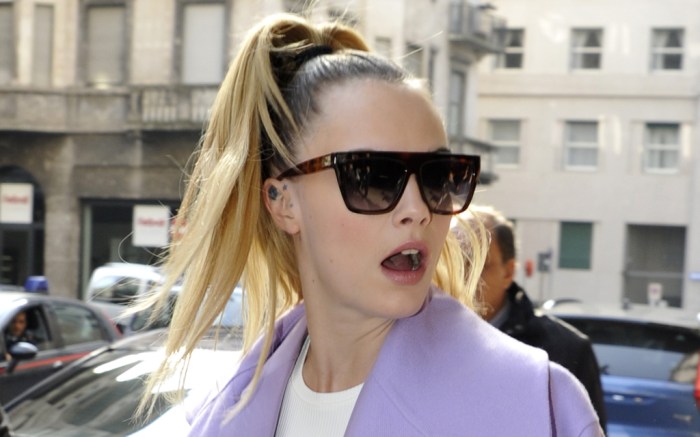 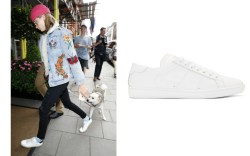 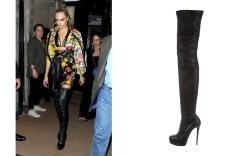 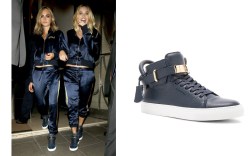 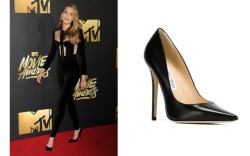 Cara Delevingne may be one of the most famous models in the world, but she sat out the runway in favor of the front row at the Boss fall ’20 show today in Milan. The Victoria’s Secret Fashion Show alum was photographed arriving at the show alongside her longtime girlfriend, actress Ashley Benson.

Delevingne wore a sharply tailored pastel purple ensemble, choosing a pantsuit and a long overcoat straight off the runway.

For shoes, Delevingne selected a pair of white pointed-toe boots with a trending curved shape, as seen from several designers for fall including Anna Sui and Moschino. The A-lister completed her look with a high ponytail and understated makeup.

Meanwhile, Benson went for a leg-baring look in a white coat with dramatic sleeves and a belted waist. The coat featured a high-low hem, which was perfect for showing off the “Pretty Little Liars” lead’s footwear. Benson’s shoes were a pair of ankle-strap sandals with a classic look, courtesy of a stiletto heel and a round toe. She went for a natural makeup look with her hair pulled back into a sleek updo.

Such a great show @boss thanks for having me

The duo was joined at the Boss show by other famous faces, including “13 Reasons Why” actor Tommy Dorfman, “Riverdale” star Madelaine Petsch and “Pirates of the Caribbean” actor Orlando Bloom.