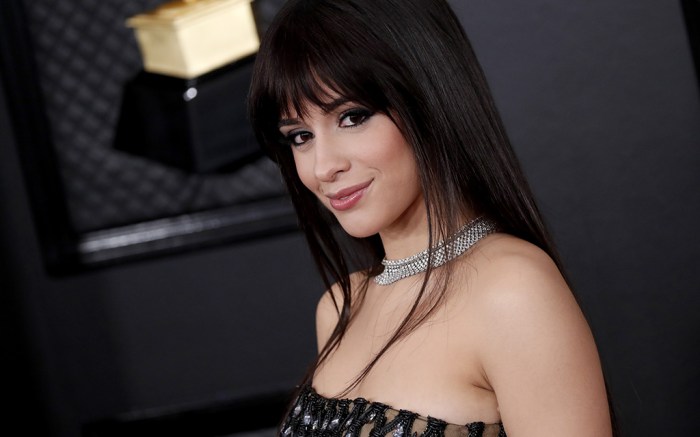 Camila Cabello went for a vampy look on the red carpet at the 2020 Grammy Awards tonight, held at the Staples Center in Los Angeles.

The pop star sported a black Atelier Versace dress. The gown consisted of two parts: a strapless minidress with large Swarovski crystals that was crafted from woven leather and a sculptural overskirt made from sheer fabric that was hand-embroidered with Barocco motifs.

The former Fifth Harmony singer completed her look with soaring black platform sandals and nearly 100 carats of diamonds from Le Vian. The jewels included a $2 million diamond collar necklace with a total carat weight of 64.

The A-lister walked the red carpet solo, but boyfriend Shawn Mendes was also in attendance. While Cabello opted for a gothic look in all black, Mendes went for a decidedly brighter ensemble. The “Lost in Japan” singer wore a raspberry-colored Louis Vuitton suit with shiny black shoes.

Mendes and Cabello are nominated together tonight for Best Pop Duo/Group Performance for their duet, “Señorita,” which peaked at No. 1 on the Billboard Hot 100 charts. The couple is performing together onstage tonight, part of a star-studded lineup that also includes Billie Eilish, the Jonas Brothers and Ariana Grande, among others.

Click through the gallery to see more celebrity red carpet arrivals at the 2020 Grammy Awards.