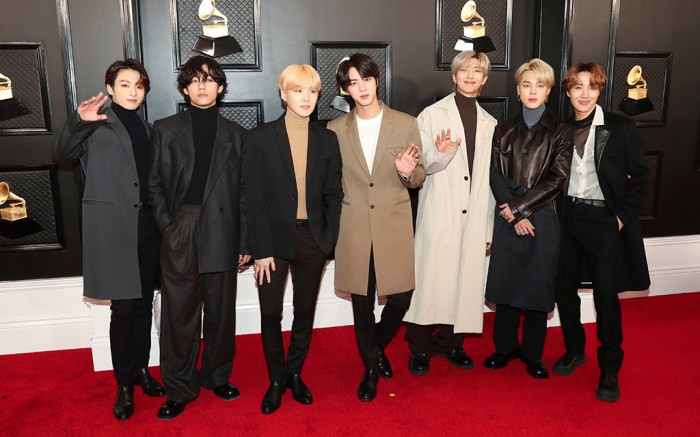 The boys’ looks were from an “It” brand, Bottega Veneta. Their coats came in a mix of neutral colorways, including tan, black, cream and gray, as well as different textures; some wore trench coats while others opted for overcoats.

BTS’ shoes were also coordinated: All seven boys opted for black shoes that appeared to be fabricated from leather. Some chose round toes, while others sought out trend-forward square toed silhouettes.

At the 2019 Grammy Awards, the group opted for all-black ensembles with shiny shoes. They wore sleek tuxedos, bringing some slight variety to their outfits with some wearing bowties and others going tie-free.

BTS is slated to perform “Old Town Road” at the show tonight, alongside a slew of major stars including Lil Nas X, Billy Ray Cyrus, Mason Ramsey and Diplo. Other scheduled performers include the Jonas Brothers, Demi Lovato and Ariana Grande. Alicia Keys, who has herself won 15 Grammys, is hosting this year’s show.

Click through the gallery to see more celebrities arriving on the red carpet at the 2020 Grammy Awards.

Billy Porter Sparkles in a ‘Lampshade’ Hat With 70,000 Crystals and Matching Boots on Grammys Red Carpet