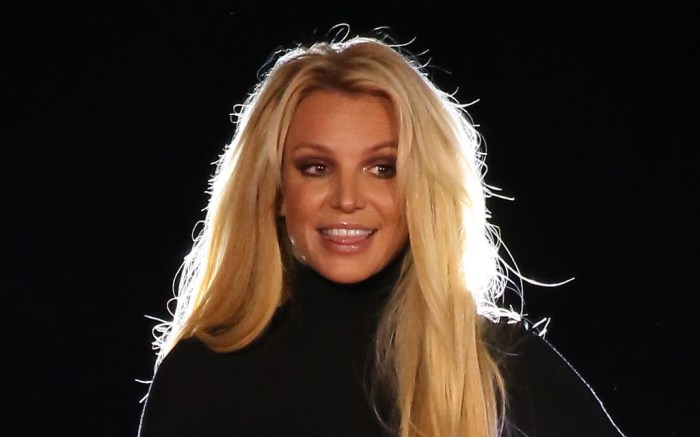 Britney Spears headed out for a beachside bike ride today in this trending footwear silhouette.

The “Toxic” singer joined her beau for a cycling excursion alongside the Californian coastline this afternoon, staying summery in a red floral crop top and a gray take on her favorite low-rise khaki shorts.

For her bike riding footwear of choice, Spears broke out her take on the “ugly” sandal trend in a tan double-strap silhouette with gold metallic accents and a lifted footbed. Considered traditionally “ugly” in the world of fashion, the singer’s sandals added her a growing list of stars — including Katie Holmes, Kendall Jenner and Chris Pine — who are trading out their chic footwear for more sport-style or orthopedic-inspired sandals from brands like Birkenstock, Teva, Prada and more.

Going to the beach 🏖 is always so much fun !!!!! We are all social distancing and wearing masks of course …. even still there is a sense of togetherness at the beach that brings me peace. I feel so small next to this vast body of water ….. it takes me back to when I was 6 years old …… the moment I would decide to get up and run to the beach …… but it’s so intimidating because I know my feet are about to touch something so beautiful …. I get so excited then chicken out 🤷🏼‍♀️🙄 !!!!! The connection I always feel with the heat from the sun on my body ….. connecting me to something way greater than myself ….. and the one moment you feel a nice breeze ….. it’s like a spiritual experience !!!!!! I love the feeling of coming home  with a golden tan …. thinking only of chocolate or ice cream ….. and still smelling like suntan oil. It’s funny how little things can touch your soul so freaking much ….. like new born babies crying …… children building sand castles 🏰 …. seeing dogs 🐶 with their families ….. wanting to scream and make a fool out of yourself and do a thousand 🤸‍♀️ cartwheels …… but you have to stay cool 😎🤷🏼‍♀️🤸‍♀️🙄🙄😂 !!!!!! Laying down and looking up at God in the clear blue sky ….. maybe we should all look up and try to listen and see the messages God is sending us so we can HELP the world today ….. GOD BLESS YOU ALL !!!!!!

In addition to platform sandals, Spears’ collection of relaxed footwear includes affordable styles like Steve Madden platforms as well as Birkenstock Arizona sandal slides and Hoka One One Clifton sneakers. When the pop star does make a red carpet appearance, she typically selects pairs from top brands such as Christian Louboutin, Giuseppe Zanotti and Le Silla.

Beyond her personal style repertoire, the “Womanizer” singer collaborated with a mix of brands throughout her career, including creating a co-branded collection with Candies in 2010; she also previously appeared in the Kenzo La Collection Momento N°2 campaign in 2018.

To echo the Queen of Pop’s trending footwear choice, try on these sandals for your next outing.

Click through the gallery to see even more of Britney Spears’ daring fashion moves over the years.