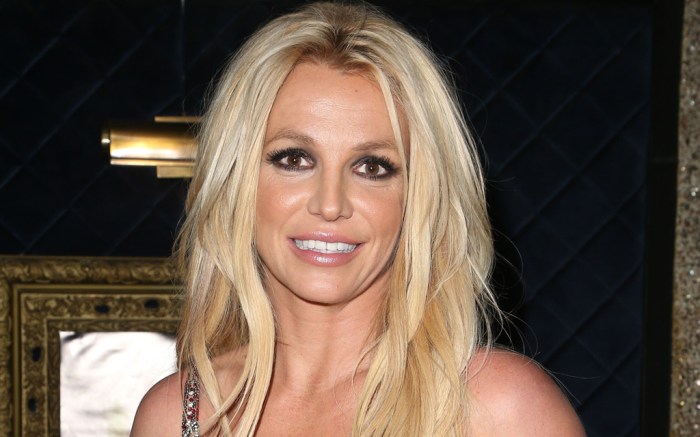 After years of red carpet appearances, Britney Spears knows a thing or two about finding her angles.

The pop star seamlessly modeled a chartreuse minidress with a plunging neckline and patterned body as she posed up a storm in a video posted to her Instagram page yesterday. For footwear, Spears selected beige platform sandals with criss-cross straps and a chunky heel.

At one point, the Grammy Award winner changed out of the minidress and into a lacy black blazer by Alexander McQueen, which she teamed with the same pair of platforms. Spears modeled while playing the song “Just Like Me,” off her album “Glory,” in the background.

The mom of two also took to Instagram yesterday to show off her freestyle dance moves, twirling barefoot on the tile flooring of her foyer. She sported a black and gray Calvin Klein sports bra paired with red plaid pajama shorts.

The “Mickey Mouse Club” alum’s wardrobe includes plenty of pairs of affordable shoes, including Steve Madden platform heels, Birkenstock sandals and Hoka One One’s Clifton sneakers. For her rare appearances on the red carpet, Spears typically tends to select designer footwear, having previously stepped out in pairs from labels such as Le Silla, Giuseppe Zanotti and Christian Louboutin.

Although Spears keeps a pretty low profile these days, she has had plenty of high-profile deals in the fashion space in the past. Most recently, the “Womanizer” hit maker starred in the Kenzo La Collection Momento N°2 campaign in 2018. Previously, Spears did a co-branded collaboration with Candies in 2010, and she has put out numerous fragrances with her name on the bottle.

Below, we’ve rounded up some sandals that offer a similar look to Spears’ pair.

Click through the gallery to see Britney Spears’ most daring red carpet ensembles through the years.