Happy Birthday, Britney Spears: A Look Back at Her Most Eye-Catching Fashion Moments Through the Years 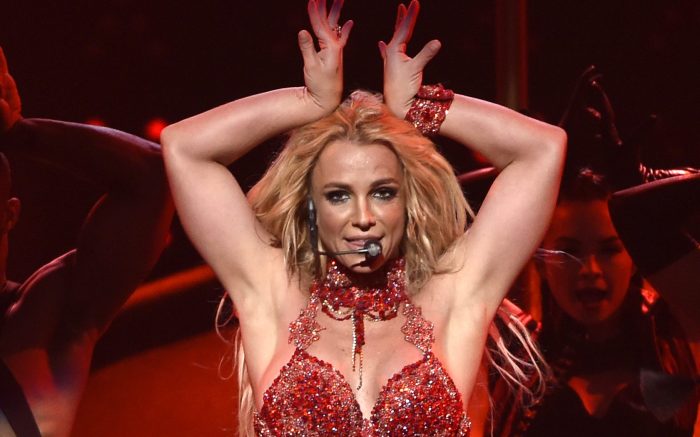 The pop star — who turns 39 on Tuesday, Dec. 2 — has without a doubt made an impact on the fashion industry over the years.

From her concert looks to her red carpet moments, Spears always manages to pull together something eye-catching and memorable. If you’re a fan of the singer, you know Spears’ wardrobe often includes sequins, sparkles, thigh-high boots and a lot of sheer.

In honor of her big day, FN has looked back in time at some of her most unforgettable style moments.

Kicking off the list is Spears’ red crystal-embossed costume that she wore on stage at the 2016 Billboard Music Awards, where she was honored with the Millennium Award. The intricately designed look featured an embellished halter choker and dangling jewels below her chest. The star paired the look with fishnet tights and matching jewelry.

As for footwear, Spears opted for matching red high-knee boots. The heeled shoes featured a similar crystal design as her costume.

Ahead her performance, which saw Spears sing fan favorites such as “Toxic” and “Womanizer,” the songstress hit the red carpet in a daring black lace Reem Acra dress. The number featured sheer sleeves with small embellishments and a cape. Spears finalized the look with a pair of statement Schutz Karlyanna gladiator sandals. The peep toe black heels hit just above her knee.

Spears also turned heads at the 2015 Billboard Awards when she stepped out in a nude embellished Yousef Al-Kasmi gown. The form-fitting number featured long sleeves and cascaded down to Spears feet, slightly hiding her gold sandal heels.

Spears proved she would always step out in sparkles when she arrived at the 29th annual GLAAD Media Awards in 2018 in a barely there mini dress from Giannina Azar. The look featured cutouts and hanging jewels. Spears completed the ensemble with a pair of transparent heels by Christian Louboutin. The footwear featured crystals across the toe and heel. The look was not only signature for Spears, but also on trend as clear sandals were (and still are) the it-shoe to wear.

That night, Spears accepted the Vanguard Award of which she said: “We can all join hands together here and know that we are all beautiful. And we can lift each other up and show our gifts without hesitation.”

Another memorable moment came in 2017 as Spears performed at the Axis Theatre in the Planet Hollywood Hotel in Las Vegas as part of her “Piece of Me” residency. The pop icon hit the stage in deep green lace bodysuit. She paired the look with a silver choker and fishnet tights.

On her feet, Spears opted for her go-to shoe, high-knee boots. The suede selections featured a rounded toe and a thick block heel, making it easy for the star to dance around in. Sam Edelman currently offers a similar pair for $89 at Nordstrom.com.

Outside of her on-stage and red carpet looks, Spears has been known to make statements during her down time. She typically opted for tracksuits by Juicy Couture.

In 2009, Spears was photographed shopping in London, wearing a brown velour tracksuit that featured gold accents. Spears paired the look with sneakers. The look has made a comeback this year as many are opting for a cozier look while quarantining amid the ongoing coronavirus pandemic.