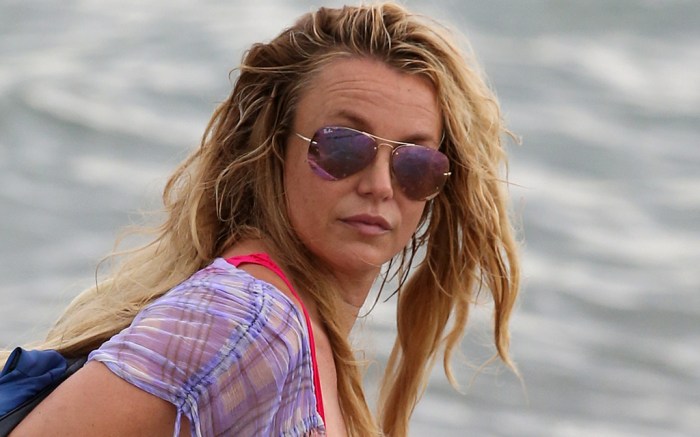 Britney Spears showed off her summer style in her latest Instagram video.

Taking to IGTV on Monday, the 38-year-old singer posed in an orange and white polka-dot crop top with ruffle detailing, along with low-rise beige shorts. Harkening back to Spears’ heyday in the early aughts, the shorts were low-slung enough to reveal the star’s hip bone, as well as a flash of a tattoo.

For footwear, Spears selected beige platform sandals with criss-cross straps and a chunky heel. The shoes were actually a repeat choice for the “Circus” songstress. During an Instagram photo shoot last month, Spears teamed the heels with a plunging chartreuse minidress for another eye-catching look.

“I know I look tan !!!! I’ve been spending lots of time at the pool  soaking in the vitamin D and I finally did my hair straight,” Spears captioned her new IGTV post.

In addition to sharing the video, the A-lister also posted a photo of herself lounging in a snake-print bikini. She had henna tattoos all over her body and wore a thin black choker to complete the look.

The “Mickey Mouse Club” alum’s wardrobe includes plenty of pairs of affordable shoes, including Steve Madden platform heels, Birkenstock sandals and Hoka One One’s Clifton sneakers. For her rare appearances on the red carpet, Spears typically tends to select designer footwear, having previously stepped out in pairs from labels such as Le Silla, Giuseppe Zanotti and Christian Louboutin.

Although the mom of two keeps a pretty low profile these days, she is no stranger to the fashion space and has landed many high-profile deals over the years. In 2010, Spears did a co-branded collection with Candies, and she appeared in the Kenzo La Collection Momento N°2 campaign in 2018. In addition, the “Womanizer” hit maker has launched plenty of eponymous fragrances over the years, many of which went on to become bestsellers.

Into Spears’ look? Shop the sandals below to emulate the Princess of Pop.

Click through the gallery for a look back at Britney Spears’ best style from the ’90s and early ’00s.