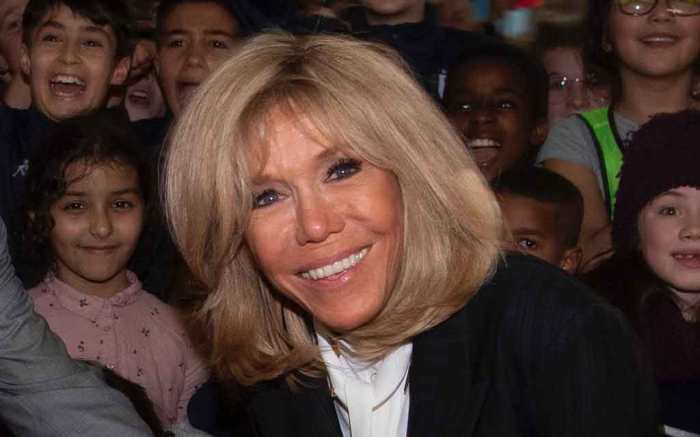 France’s first lady, Brigitte Macron, gave her pantsuit a little bit of edge courtesy of her footwear Wednesday at the launch of the 2020 Pièces Jaunes operation, at the Regional Hospital Center of Orleans, France. Macron is the new head of the Hospital of Paris-Hospitals of France Foundation, which raises funds through the sale of yellow coins. French soccer star, Didier Deschamps (shown), is patron of the annual effort.

On her feet, the former schoolteacher sported black boots with stud accents, a block heel and a lug outsole. The almond-toe boots appeared to be have been fabricated from smooth leather.

The boots looked like something a rock star would wear — perfect for pairing with leather trousers or distressed denim. But Macron proved that edgier footwear can also be a fitting counterpart to a suit. The French first lady can often be spotted in Louis Vuitton clothing, shoes and accessories. With respect to footwear specifically, she tends to favor pointed-toe pumps set on a stiletto or block heel, choosing styles that add a boost of around 4 inches. Louis Vuitton’s Eyeline is one of her staples, and she is also a fan of the graphic-print Matchmake pump.

While Macron’s style tends to have a more classic vibe, yesterday’s shoes weren’t the only edgier choice she’s made. She has previously chosen pumps with trend-forward accents in the form of snake print or PVC accents.

Click through the gallery to see more of Brigitte Macron’s style.