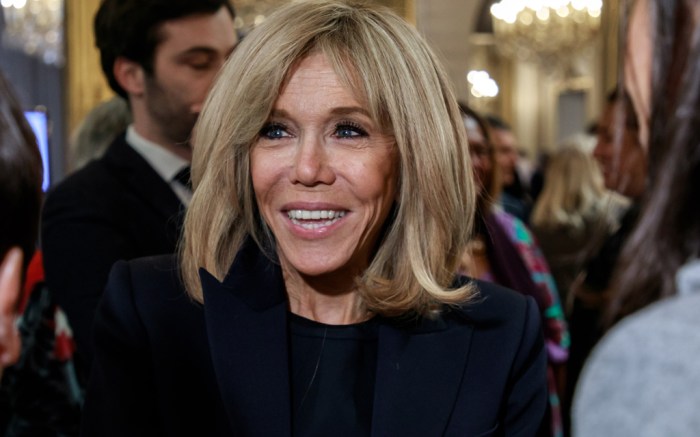 Brigitte Macron did all-black dressing the French girl way on Friday for the opening of the Paris International Agricultural Show at Elysee Palace.

France’s first lady sported a little black dress, which she layered under a blazer that had gold button accents and sharp shoulders. Despite the February weather, Macron appeared to be either clad in ultrasheer tights or to have gone bare-legged under her dress.

For footwear, the former school teacher seemed to be wearing one of her go-to silhouettes: Louis Vuitton’s Eyeline pump. The Eyeline, no longer available for retail purchase, is a classic pump with a 4.5-inch stiletto heel, a pointed toe and subtle metallic accents at the heel. While Macron owns the Eyeline in several colorways and fabrication, her shoes on Friday appeared to be crafted from black leather.

So-called French girl style favors the timeless over the trendy. The ethos involves investing in fewer pieces that can be worn in more ways — with items like skinny jeans and tailored jackets providing the basis for looks.

As one of France’s most recognizable women, it’s no surprise that Macron has mastered the classic-chic vibe for which Parisians are known. She tends to wear smart wardrobe staples such as blazers, sheath dresses and pointed pumps — and she often sports styles from one of France’s most storied fashion houses, Louis Vuitton.