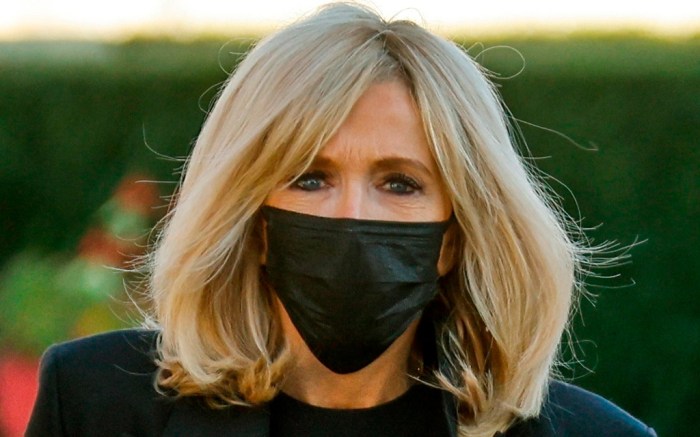 For the solemn occasion, Brigitte opted for an all-black ensemble layering a tailored peacoat over a knee-length black shift dress; she then kept safe in a coordinating face mask and leather gloves.

Her footwear for the occasion also fell in line with the monochromatic ensemble as the French first lady opted for one of her go-to heels from Louis Vuitton. The $1,010 Matchmake pumps from the French fashion house feature a pointed-toe silhouette with smooth black uppers and a contrasting logo-coated block heel.

When it comes to the French first lady’s style, she oftentimes favors Louis Vuitton when it comes to clothing, shoes and accessories. With footwear, specifically, she leans toward pointed-toe pumps with a stiletto or block heel usually around 4 inches high. The Eyeline silhouette from the French fashion powerhouse remains one of her favorites, of course, but she also frequents the graphic-print Matchmake pump and booties. The former educator lives up to the style motifs of her native France, opting for layered looks and perfectly tailored pieces that keep up with the nation’s style aesthetic: chic, clean and understated.

Click through the gallery to discover more of Brigitte Macron’s footwear choices throughout her time as the first lady of France.