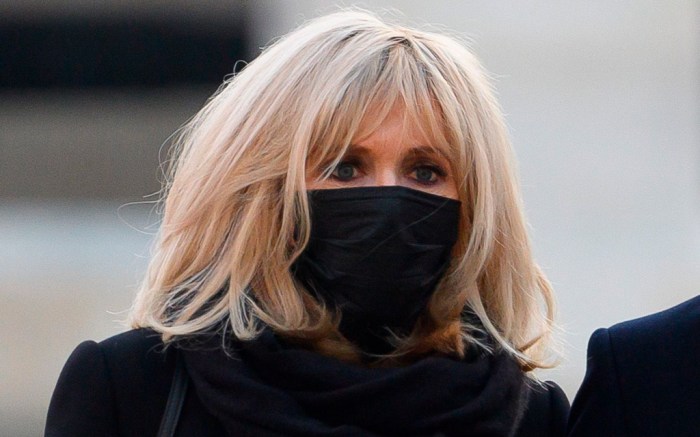 French President Emmanuel Macron and his wife Brigitte Macron attended an honorary ceremony for Daniel Cordier last week; Cordier was a World War II veteran and considered a “Compagnon de la Liberation,” which translates to a “Companion of the Liberation” for his heroic actions during the mid-20th century war. Cordier died on Nov. 20 at his home in Cannes, France, of unspecified causes; he was 100 years old.

For the solemn occasion on Nov. 26, Brigitte wore all black to pay homage to the historical hero at the courtyard of the Invalides monument in Paris. Her ensemble included a Louis Vuitton double-breasted peacoat layered over opaque black tights with a coordinating protective face mask.

To walk the cobblestone entranceway, the French first lady opted for latex booties, set atop a sturdy block heel. The high-gloss design came complete with a metallic blade detail across the heel, a signature touch of more vintage Louis Vuitton designs.

The former school teacher’s coat for the service last Thursday resembled the same Louis Vuitton coat she opted for at another event earlier in the month. As part of the an induction ceremony of Maurice Genevoix and “Those of 14” in the Pantheon, Brigitte wore the coat at the commemoration of the 102nd anniversary of the armistice of 1918 and the centenary of the burial of the Unknown Soldier under the Arc de Triomphe in Paris on Nov. 11.

When it comes to the French first lady’s style, she oftentimes favors Louis Vuitton when it comes to clothing, shoes and accessories. With footwear, specifically, she leans toward pointed-toe pumps with a stiletto or block heel usually around 4 inches high. The Eyeline silhouette from the French fashion powerhouse remains one of her favorites, of course, but she also frequents the graphic-print Matchmake pump and booties. The former educator lives up to the style motifs of her native France, opting for layered looks and perfectly tailored pieces that keep up with the nation’s style aesthetic: chic, clean and understated.

Click through the gallery to discover more of Brigitte Macron’s top footwear moments throughout the years.