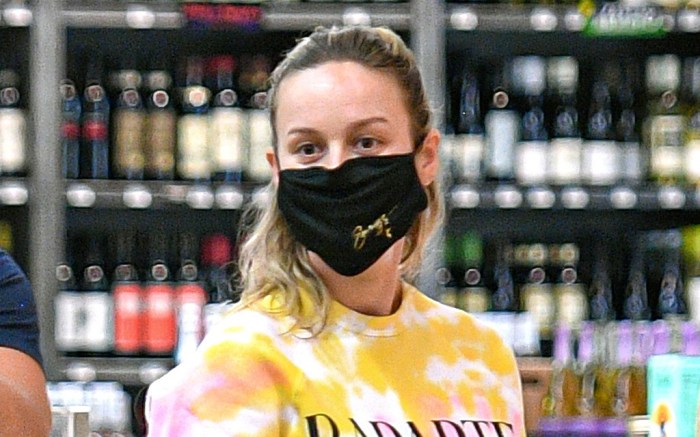 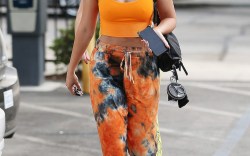 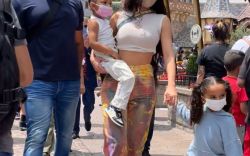 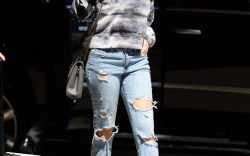 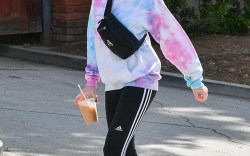 Brie Larson broke out one of 2020’s biggest trends for her grocery run on Monday.

Grabbing food and drink in a local Los Angeles store with her beau Elijah Allan-Blitz, the “Captain Marvel” actress opted for a pink and yellow tie-dye set from Rodarte. The brand’s inventive “Radarte” line of loungewear provided a $320 sweatshirt with matching $275 sweatpants, all available at Shopbop.com.

And the colorful features of Larson’s look didn’t stop at her sweats. The “Room” star opted for a set of 1990s-inspired jelly sandals from footwear brand Melissa’s collaboration with Opening Ceremony. The Hatch sandals come set with a netted jelly upper atop a block-heeled translucent green outsole. Offered as well in two additional colorways, the Melissa x Opening Ceremony Hatch sandals retail for $119 at Neiman Marcus.

While tie-dye has been around for decades and is most famously attached to the hippie era of the 1960s and 1970s, tie-dye was embraced enthusiastically by celebrities last year in spring. Seen on the likes of J. Balvin, Taylor Swift and Gigi Hadid, the print in all its psychedelic glory developed and grew into a continuous motif amongst brands like Versace, seen in its spring ’20 runway, and Adidas, which released a rainbow-dyed sneaker collection.

As for Larson herself, tie-dye is just one of the many trends that she includes in her daily rotation of style. Her go-to brands for attire and footwear include Alessandra Rich, Miu Miu, Celine, Alexander McQueen and even Christian Louboutin. Beyond her own personal closet, the “Avengers: Endgame” actress has served as an ambassador for Nissan as well as for the Toronto International Film Festival.