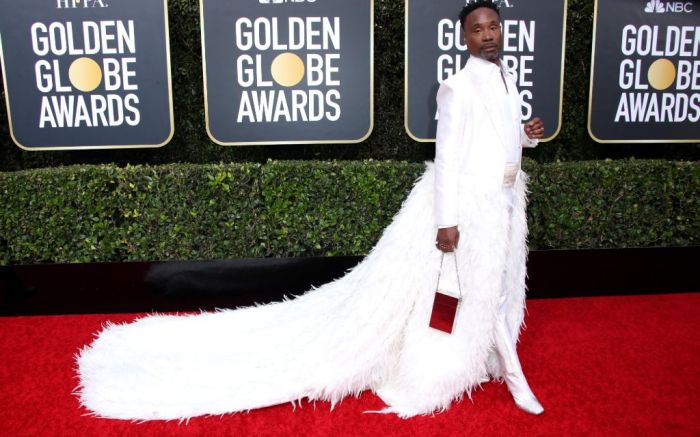 If the red carpet had its own awards show for the actual awards show season, Billy Porter would undoubtedly be the year’s winner. The actor, singer and ‘Pose’ star has been turning out the most exciting, original and just plain fun looks on the red carpet all winter, from a feather-flocked white tuxedo at the Golden Globes to a hat-to-toe disco-beaded dream at the Grammys.

Making it all happen behind the scenes is Sam Ratelle. Here, Porter’s longtime stylist and costume designer tells FN how he has curated all the looks for January’s awards month — and what Porter fans can expect from the star come Oscars night, Sunday, Feb. 9.

FN: What is a typical day for you during awards show season?

Sam Ratelle: [It’s] insane. Often I don’t know where I’ll be on any given day. There’s a lot of travel since Billy and I are both based in New York and most of the awards shows are in LA. Most days are spent discussing custom designs with a variety of designers, going over logistics with my team, accompanying Billy to press appearances, traveling, and dealing with mountains of emails. There are countless fittings, fueling of the social media machine, negotiating advertising deals and speaking with the press. And every once in a while, I get to sleep!

Many people think styling is glamorous, fun, and all about shopping, but really it’s a marketing job.The goal is to make your client look great, represent the brand in the best way possible, and ultimately sell clothing. Everyone needs a return on their investment — the client, the brand and me.

What’s the first thing you do when you wake up?

SR: Breathe, check my emails, drink some tea, and mentally prepare for the day. Sometimes I run straight to the first TV appearance, fitting or meeting of that day.

Most of Billy’s looks are super involved — like the beaded fringe curtain hat from the Grammys. How long does it actually take for these specially created items to
hit the red carpet?

SR: Everything has a different time line, but for major appearances, we work approximately six months in advance. When you’re working with custom couture, it takes a village to create a garment as it can often take hundreds of hours to construct — especially if embroidery is involved. There are exceptions, however. For instance, we didn’t settle on the Grammy Awards until two weeks before the show. In that case, I’m fortunate enough to be working with brilliant, skilled designers who are willing to work through the night to make magic happen.

Billy has been wearing a lot of Coach footwear, specifically a platform boot silhouette. How did this custom creation come to be?

SR: The boots were originally introduced to us as a prototype that was under consideration for production. They showed them to us early because they knew Billy and I would love them for his appearance on the Coach float at the Macy’s Thanksgiving Day Parade. They gave us three options and the Coach team was lovely enough to make them in four different colors: black, white, burgundy, and tan. Once Billy started wearing them, he became so in love with them that we’ve been using them consistently. When it came time to have a disco boot for the Grammys, I called the Coach team and asked to collaborate on a pair covered in Preciosa Crystal embellished by A Morir Studio. When Billy’s not looking, I secretly try them on.

There’s one more big red carpet moment left this season: the Oscars. What can you tell us about your plan for Billy’s look?

SR: I can’t say much, but I can say this: The Category… ROYALTY! There will be more than one look revealed that night.