Billy Porter Takes On LFW in a Ruffled Dress, His Go-To Coach Platforms + Lots of Sparkles 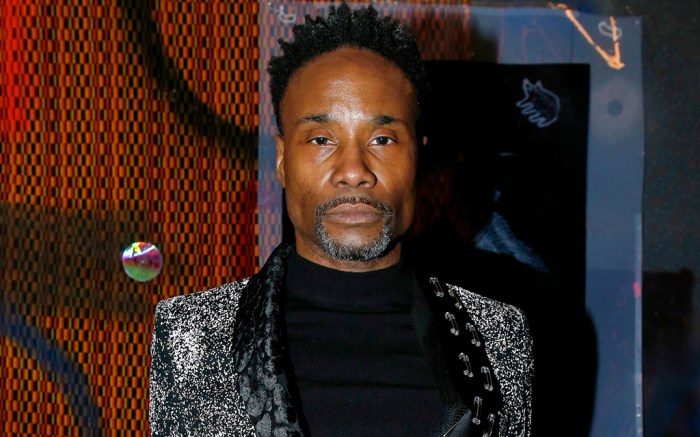 Awards season may have ended, but fear not: Billy Porter’s streak of swoon-worthy fashion moments isn’t over yet.

The “Pose” star is currently creating magical ensembles at London Fashion Week fall ’20, where he’s already attended several of the biggest shows. One of Porter’s standout outfits came for Matty Bovan on Saturday, where he wore a glistening Alexandro Fratelli blazer over a ruffled, layered dress from Kim Perets.

On his feet, Porter wore his signature Coach platform boots, which feature a chunky block heel and an almond toe. While the Tony Award winner owns the shoes in several colorways, he opted for a fierce white pair Saturday. The shoes have become a favorite of Porter’s, worn for several high-profile appearances — including the 2020 Grammy Awards.

“The boots were originally introduced to us as a prototype that was under consideration for production. They showed them to us early because they knew Billy and I would love them for his appearance on the Coach float at the Macy’s Thanksgiving Day Parade,” Porter’s stylist Sam Ratelle told FN of the platforms. “Once Billy started wearing them, he became so in love with them that we’ve been using them consistently.”

Of course, Porter’s no one trick pony when it comes to footwear. Another outfit on Saturday, for the Richard Quinn show, included a clever mix of florals and leather for look that was equally parts romantic and edgy The Emmy awardee wore a glistening floral jacket over form-fitting, vinyl-like pants. He accented the outfit with block-heeled black mid-calf boots, rectangular sunglasses and a shining hat.

Flip through the gallery for more of Billy Porter’s fashion.