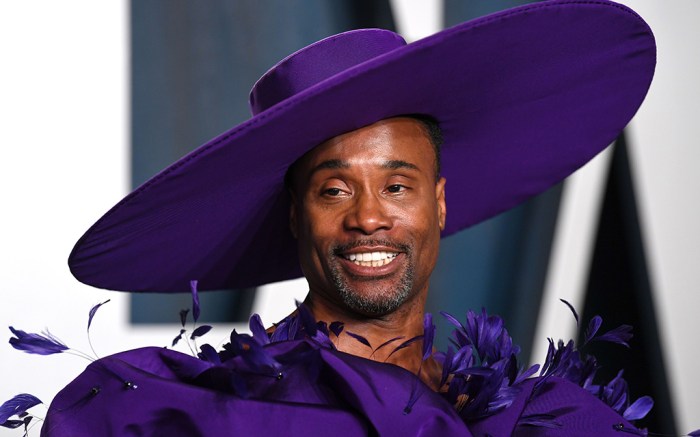 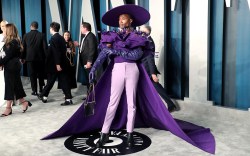 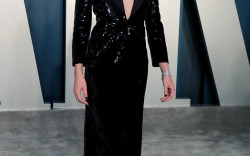 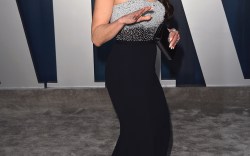 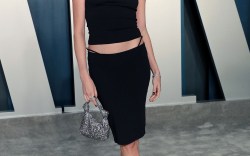 After the party is the after-party, and Billy Porter continued his streak of great fashion at the Elton John AIDS Foundation and Vanity Fair Oscars parties, after performing at the Academy Awards.

The “Pose” star arrived at the Vanity Fair party wearing a dramatic custom Christian Siriano look in shades of purple, including a bubble top with feathers and a long train and lavender pants.

On his feet, Porter wore a pair of black boots with a block heel and a square toe. The shoes appeared to be fabricated from leather.

The actor’s ensemble featured plenty of campy details, including a wide-brimmed hat and elbow-length gloves. Porter completed the chic look with a black-and-white handbag reading, “F**k U Pay Me!”

Porter performed at the Oscars, and he made a statement on that carpet, too. The Tony Award winner wore a gown with a golden bodice and a dramatic baroque-inspired skirt. On his feet, Porter wore a pair of bespoke Jimmy Choo lace-up boots with embellishment at the toe and a soaring platform heel.

The show-stopping ensembles were put together with the assistance of Porter’s longtime stylist, costume designer Sam Ratelle. Speaking to FN earlier this month, Ratelle said of his client’s Oscars night fashion: “The Category [is] ROYALTY!” The purple look fit that schema since the color has been associated with royalty and power for centuries.