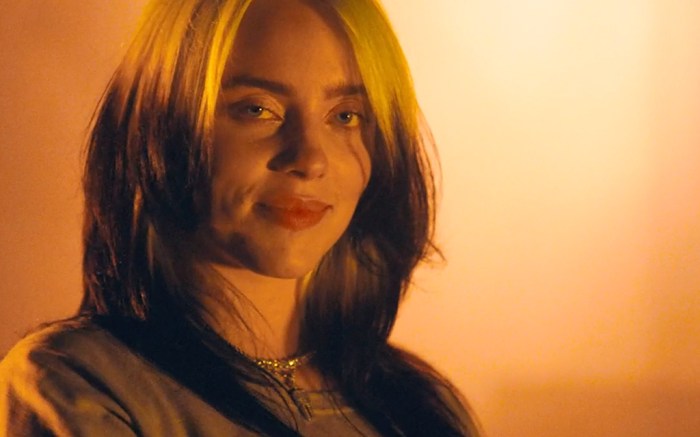 Billie Eilish made an appearance at the 2020 Democratic National Convention on Wednesday night and she didn’t hold back about her feelings for President Donald Trump.

“You don’t need me to tell you things are a mess. Donald Trump is destroying our country and everything we care about. We need leaders who will solve problems like climate change and Covid, not deny them,” said Eilish during the televised broadcast. “Leaders who will fight against systemic racism and inequality, and that starts by voting for someone who understands how much is at stake, someone who is building a team that shares our values. It starts with voting against Donald Trump and for Joe Biden.”

Eilish performed her newest single, “My Future,” for the event. She joined a list of other scheduled artists who also took the stage, including Jennifer Hudson, The Chicks, Leon Bridges, Billy Porter, Maggie Rogers, Prince Royce, John Legend and Stephen Stills.

For her performance Eilish dressed in her signature style, including and oversized tee and pants look. The Grammy winner went monochromatic, sporting an entirely beige ensemble. Her shoes also matched her outfit and offered a pop of drama, thanks to the shoe’s crystal embellishments.

Eilish opted for Gucci’s Flashtrek sneakers, which are often a go-to for the star, whether she’s performing or hitting the red carpet.

The chunky, over-sized kicks feature a removable, jewel-covered elastic strap and a mix of materials, such as durable rubber, suede and technical canvas.

Following her appearance, Eilish took to Instagram to encourage fans to vote. She also linked to her own website where she offers resources, with a note that reads: “This election is the most important election of our lifetimes so far. it’s never been more important to vote. There are lots of groups doing great work to get people registered. pick one below that speaks to you, then register to vote and follow them everywhere. stay engaged, and let’s all get to the polls.”