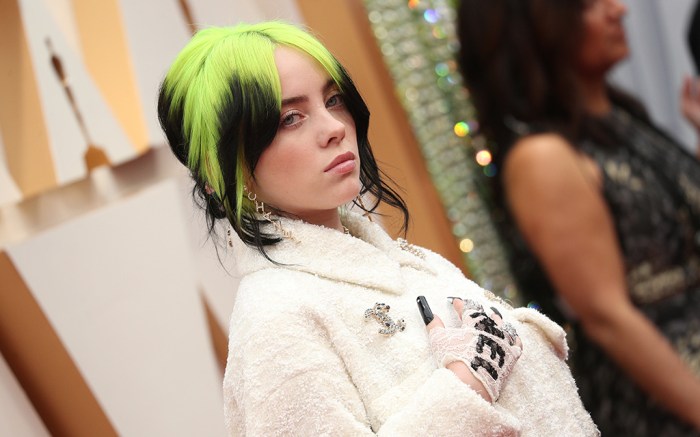 Billie Eilish has arrived at the 2020 Academy Awards, and she’s brought her typical oversize style with her.

The 18-year-old pop star hit the red carpet at the Dolby Theatre in Los Angeles wearing a white Chanel ensemble. The 5-time Grammy Award winner often can be spotted in sweatsuits, but she went for a slightly more formal outfit on the carpet, choosing a white-on-white houndstooth set. Her jacket featured embellishment with Chanel’s interlocking “C” logo, with a graffiti-inspired smudge accent adding another fun element.

For footwear, Eilish opted for a pair of fluffy black-and-white sneakers. The singer wore lace fingerless gloves with layered rings and necklaces — and she even had crystal accents on her nails. She wore her two-tone hair (a mix of brunette and slime green) pulled up into a messy updo.

As Eilish’s music career has blossomed, she’s also become a style icon to many of her fans. Her androgynous ensembles have inspired others to follow suit, with oversize T-shirts, baggy pants and gender-fluid silhouettes gaining popularity among female street style stars.

The A-lister will be performing at tonight’s ceremony as part of the in memoriam segment. The ceremony itself begins at 8 p.m. ET, although the carpet is already well underway.

Click through the gallery to see all the red carpet arrivals at the 2020 Oscars.