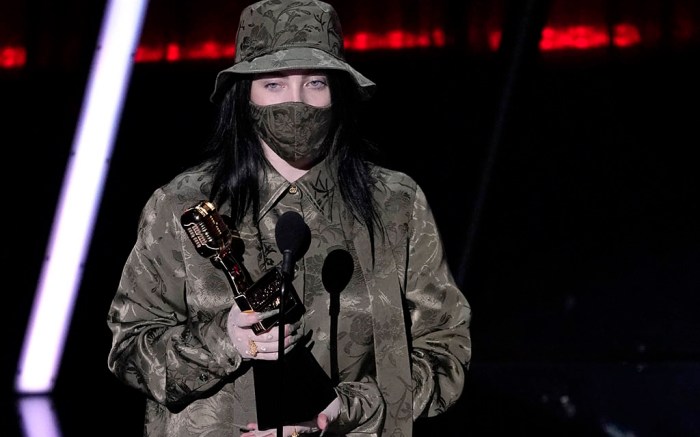 Billie Eilish is the big winner at the 2020 Billboard Music Awards. The singer, nominated for 12 awards, took home the honors of Top Female Artist and Top Billboard 200 Album so far this evening.

Eilish took the stage on Wednesday night in Los Angeles in her signature oversized style. She wore a custom Gucci monochromatic ensemble, which came complete with a matching face mask and bucket hat.

Her look featured an olive green ottoman floral jacquard oversized shirt with self-tie scarf and floral jacquard pants in the same pattern. She paired the outfit with blush lace gloves and white and green leather Screener sneakers by Gucci with removable crystal chain detailing. The shoes retail for $1,590.

The “Bad Guy” singer finished off her look in jewels, including a GG Running necklace in yellow gold and diamonds and a Le Marché des Merveilles earrings with butterfly motif. Finally, she completed the ensemble with matching floral jacquard nails.

The 2020 Billboard Music Awards is airing live sans audience tonight from the Dolby Theater to celebrate the best in the music industry. Kelly Clarkson has returned to host the show for her third year in a row and Post Malone leads the nominees with 16 nods in 15 different categories. Lil Nas X follows suit with 13 nominations.

For the coveted title of Top Artist, the nominees a include Taylor Swift, the Jonas Brothers, Eilish, Khalid and Post Malone. As for performances, Alicia Keys joins the star-studded lineup that also includes Brandy, Demi Lovato, Bad Bunny, Sia, Post Malone and BTS amongst others.

See more style on stage at the Billboard Music Awards.