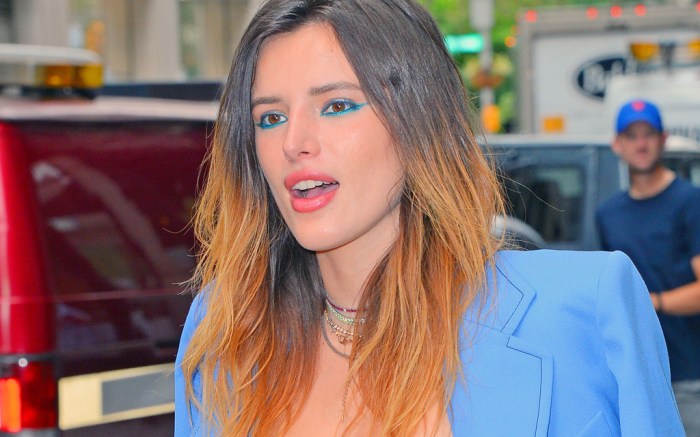 Bella Thorne opted for a black-and-white take on gym style as she worked out during a vacation with boyfriend Benjamin Mascolo.

Thorne looked comfy-chic in a black sports bra, paired with white shorts that featured horizontal black stripes. For footwear, the “Shake It Up” lead selected black running sneakers, which she layered over crew socks that appeared to be covered in a marijuana leaf print.

Bens been forcing me to get up early go to the gym and be healthier. Get yourself a partner that makes YOU better ❤️🌌

Mascolo could be seen walking through the frame of Thorne’s video. The Italian entertainer was clad in a black T-shirt and athletic shorts, adding a pop of color to his ensemble with neon green-soled Nike sneakers.

“Bens been forcing me to get up early go to the gym and be healthier. Get yourself a partner that makes YOU better ❤️🌌,” Thorne captioned her Instagram post.

In a previous post, the “Burn So Bright” performer revealed that she and Mascolo had been apart for five months while she quarantined in the United States and he was confined to Italy. The duo were able to reunite in Cabo San Lucas, Mexico.

After 5 months reunited & it feels so good ❤️ where shall we go next ??since ben isn’t allowed in America yet… and I can’t go to Italy unless I have a work permit there

When it comes to her personal style, Thorne is a big fan of casual footwear such as Converse Chuck Taylor kicks, Ash Addict sneakers and Ugg Fluff Yeah slides. For red carpets and other public appearances, the “Midnight Sun” star gives her look a glamorous upgrade with high heels from the likes of Christian Louboutin, Saint Laurent and Stella Luna.

While she is best known as an actress and singer, Thorne also has credentials in the fashion and beauty space. The Disney Channel alum has served as an ambassador for Biore, Buxom and Neutrogena products as well as starred in campaigns for Miss Me, Candie’s and more. Up next for the multihyphenate is an appearance in the upcoming series “Paradise City,” which also features Olivia Culpo as well as the late Cameron Boyce.

Below, we’ve rounded up some styles to help you achieve a similar look to the star’s.

Click through the gallery for a look at some of Bella Thorne’s best street style outfits over the years.