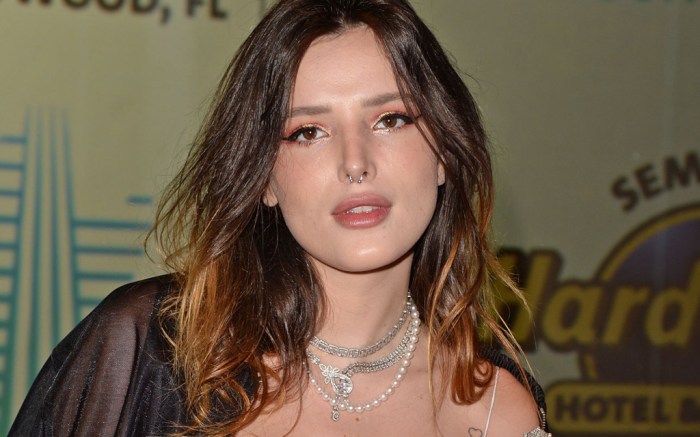 Taking to the photo-sharing platform, the 22-year-old “Midnight Sun” actress posed in a cherry red crop top and pants set teamed with white Chanel slides. The shoes appeared to be fabricated from leather, with a monogrammed logo on the top and an espadrille-style sole. While Thorne’s exact footwear is not currently available for purchase, a similar style released in 2014 with a $450 price tag.

Thorne completed her ensemble with layered necklaces, including a Chanel choker, as well as a watch that appeared to be studded with diamonds. The former Disney Channel star captioned her post: “INFAMOUS is the #1 new movie in America! Just got the call from our studio thank u thank u thank u THANK U!!! LETS GO BOX OFFICE.”

“Infamous” debuted earlier this month across several platforms including Amazon, iTunes Google Play, Vudu and Fandango. In the film, Thorne portrays Arielle, a young woman who leaves her small town life in Florida after falling for a recently paroled criminal named Dean (portrayed by Jake Manley). As they seek viral fame and grow their social media following, the couple embark on a dangerous lifestyle that includes robbery, car chases and even murder.

When it comes to her personal style, the Thorne is a big fan of casual footwear such as Converse Chuck Taylor kicks, Ash Addict sneakers and Ugg Fluff Yeah slides. For red carpets and other public appearances, the A-lister glams up her look with high heels from the likes of Saint Laurent, Stella Luna and Christian Louboutin.

While she is best known as an actress and singer, Thorne also has credentials in the fashion and beauty space. The “Walk with Me” performer has served as an ambassador for Biore, Buxom and Neutrogena products as well as starred in campaigns for Miss Me, Candie’s and more. As for her next career move, the “Shake It Up” alum is set to appear in an upcoming series, “Paradise City,” alongside Olivia Culpo and the late Cameron Boyce.

Below, we’ve rounded up some slides to help you achieve a similar look to Thorne’s.

Click through the gallery for a look at Bella Thorne’s best street style ensembles.