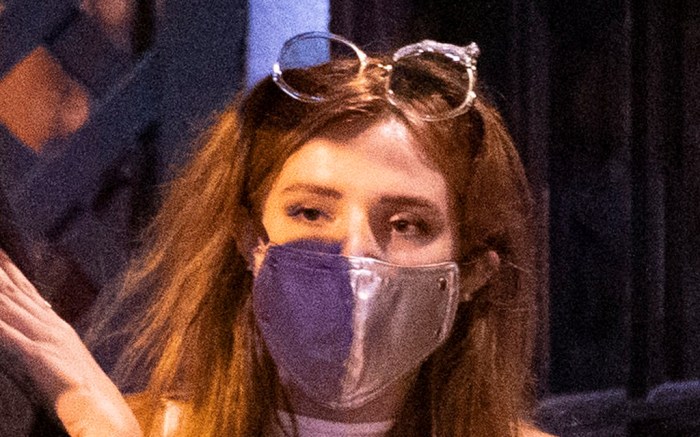 Bella Thorne stepped out for a bite to eat alongside “Too Hot to Handle” star Francesca Farago last night.

Thorne joined the Netflix star in Los Angeles wearing yin and yang outfits; while Farago opted for a black bralette and biker shorts, Thorne went for a lighter look in a white crop top and flare-hem lounge pants. Both stars made sure to keep safe in protective face masks.

As for footwear, Farago decided on an invisible towering heel and Thorne broke out a lower silhouette. Her chunky black and white sneakers featured smooth uppers with contrast time and laces, all atop a lifted outsole. On the lateral side, the Chanel signature double logo became visible, accenting the mid-top design. While the actress’ sneakers are not currently available online, similar pairs retail from $925 to $950 at Chanel.com.

On Wednesday night, Thorne showed off a more glam look for her almost 24 million Instagram followers. She modeled a $395 dual-tone pink and gold Pinko twisted dress, available at Farfetch.com, teamed to stunning diamond jewels and a bird-chained pink purse.

Tomorrow’s a big day for history does anyone know what it is ?

When it comes to Thorne’s personal style, the actress already owns a wide collection of pairs from Ugg, including the brand’s edgy graffiti slides, in addition to other trending brands like Ash. The 22-year-old tends to mix it up between casual short shorts and sneakers and heels from brands like Christian Louboutin, Stella Luna and Saint Laurent. The “Midnight Sun” star has served as an ambassador for Biore, Buxom and Neutrogena products as well as starred in campaigns for Miss Me, Candie’s and more. As for next projects, the entertainer is also set to star in an upcoming series titled “Paradise City” alongside Olivia Culpo and the late Cameron Boyce.