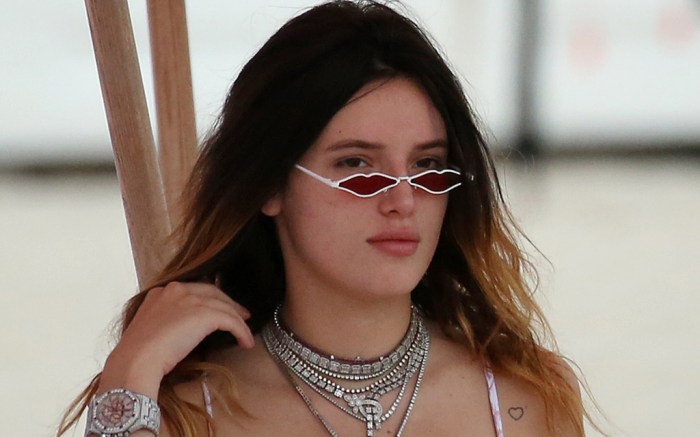 Bella Thorne showed off her daring style in a boudoir-inspired photoshoot this week.

The “Infamous” actress posed in a vintage-inspired lace-trim bra and high-rise briefs set on Thursday evening, as seen on her Instagram Stories. The 22-year-old star mirrored the blue accents of the look with silky gloves and a coordinating set of footwear.

The glittering set of footwear bears resemblance to the Attico’s signature Swirl heel silhouette with its layered ankle-wrap finish and pointed-toe front. Coated in glitter and embellishments in a slingback design, similar blue colorways retail for $874 at MyTheresa.com.

When it comes to Thorne’s personal style, the actress already owns a wide collection of pairs from Ugg, including the brand’s edgy graffiti slides, in addition to other more affordable trending brands like Ash, Puma and Converse. The former Disney Channel star tends to mix it up between casual short shorts and sneakers and heels from brands like Christian Louboutin, Stella Luna and Saint Laurent.

Most recently, the actress gave a glimpse at her glam side for her almost 24 million Instagram followers. She modeled a $395 dual-tone pink and gold Pinko twisted dress, available at Farfetch.com, teamed to stunning diamond jewels and a bird-chained pink purse.

Tomorrow’s a big day for history does anyone know what it is ?

The “Midnight Sun” star has served as an ambassador for Biore, Buxom and Neutrogena products as well as starred in campaigns for Miss Me, Candie’s and more. As for next projects, the entertainer is also set to star in an upcoming series titled “Paradise City” alongside Olivia Culpo and the late Cameron Boyce.

Click through the gallery to see more of Bella Thorne’s best street style looks over the years.