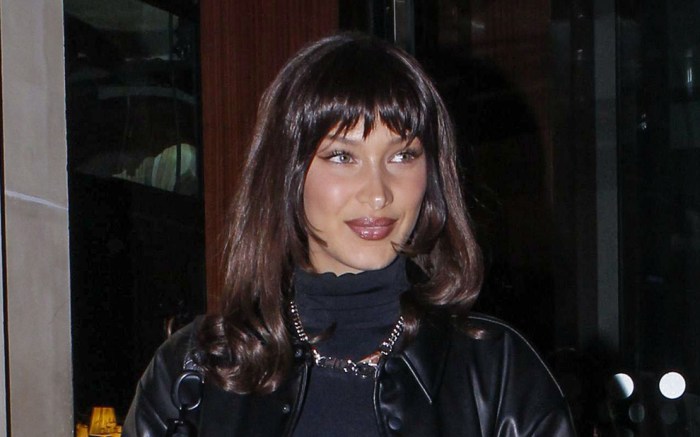 Bella Hadid is the chicest farm girl around.

The Dior Beauty ambassador sported a beige and blue jacket layered over a plaid top and dark-wash mom jeans.

For footwear, she selected worn-in black work boots with a lace-up front and a tan sole.

Hadid wore her hair pulled into an updo and accessorized with gold huggies. In addition to the images of herself planting lavender alongside her mother, the A-lister shared another photograph wherein she is playing with one of her family’s goats.

Older sister Gigi appeared to be into Hadid’s post, as she commented on her sibling’s Instagram post not once but twice, writing “Goat Olympics” as well as “Lavender Olympics.”

One of the world’s most sought after models, Hadid has appeared in fashion campaigns aplenty, for labels such as Alexander Wang, Calvin Klein and Michael Kors. While most of her ads were shot in a studio by a photographer, Hadid’s most recent appearance is a little bit different. She stars in Jacquemus’ spring ’20 campaign, which Simon Porte Jacquemus produced and directed over FaceTime.

In addition to shooting Jacquemus’ campaign via FaceTime, Hadid also used the video app to shoot an editorial for Vogue Italia. She appears in images for the publication wearing sky-high gold DSquared2 sandals with black underwear and a long-sleeve tiger-print top.

Times are changing and working from home has a new meaning …. New work for @vogueitalia shot and styled through FaceTime by my Quaranqueens @briannalcapozzi @haleywollens PRODUCTION/lighting by @Laurenperez 🖤Much love . feeling lucky to work

When it comes to her typical style, Hadid often can be found in casual wares. The “It” girl is a big fan of Dr. Martens boots, Converse sneakers and Ugg Fluff Yeah slippers.